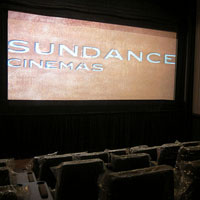 When Sundance Cinemas opens to the public on August 31, it will have approximately a third fewer seats than it did in its previous incarnation as the Laemmle Sunset 5. The five-screen venue will offer patrons 635 seats, down from the approximately 1,000 it used to contain. Yesterday, most of them were still wrapped in plastic.

Designed in the “luxury theater” mode popularized by the Arclight, the venue has been thoroughly redone. Outside, there’s now a patio with shaded tables. Much of the lobby has been ripped out; muted wood paneling adds a decorative touch. The concessions counter has been replaced by a sleek bar where moviegoers can buy beer and wine. On the second level, what used to be a manager’s office has been opened up and transformed into a sizable lounge decorated with leather couches. Inside the theaters, the seats are tall, plush, and dangerously comfortable. The cup-holders are well placed, and there’s a small dinette, ideal for resting your purse or a glass of pinot, between every two chairs.

Sundance hasn’t yet announced its lineup, but the programming will likely be a mix of top shelf indie films and lesser known movies straight off the festival circuit. All that comfort — the reserved stadium seating, the casual lounging — doesn’t come cheap. Tickets for a Friday or Saturday night will cost $15 per person, typical for a luxe L.A. theater.