Home Uncategorized Such A Night 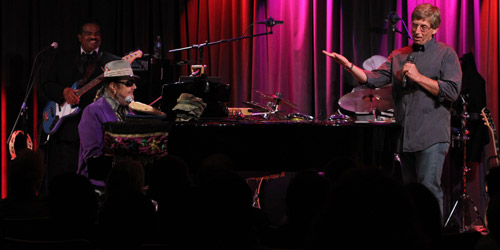 “I gotta attitude,” said Dr. John. The iconic New Orleans pianist-singer-songwriter-producer was responding last Monday night to the first question of the evening about the BP oil spill. But he didn’t leave it at that. Over the 2-hour Q&A and live performance, the latest in the Grammy Museum’s “An Evening With” series, he had plenty to say about the spill, even working a jab at BP into his song “Black Gold” from his 2008 Grammy award-winning release City That Care Forgot.

This is the 17th “An Evening With” at the Grammy Museum at LA Live downtown. Each one has been terrific—from Annie Lennox to Ringo Starr to Brian Wilson—a chance for about 200 people to get up close to one of their musical heroes. This week’s was a preview of Tribal, Dr. John’s new CD (out August 3) whose title is inspired by his feeling that “The whole world is one tribe. We’re all one. All the rest is confusion. All the rest is jive.”

Speaking between a handful of songs that spanned his 50+ year career, John “Mac” Rebennack, Jr., accompanied by the incredible Lower 911 band, spoke with Grammy Museum executive director Robert Santelli about his earlier days (“My dad encouraged me to go on the road because I was doing so bad in school”), coming to Los Angeles in 1963 as a session musician, and New Orleans’ place in the birth of rock ‘n roll. Dressed in a purple suit, with his trademark fedora on his head and beads of animal teeth around his neck, Dr. John even treated the crowd to a rare performance on guitar, an instrument he had to give up when the end of one of his fingers was shot off defending another musician.

Dr. John spoke at length about his storied career spanning many genres and continued his role as an ambassador of the culture of his beloved New Orleans as a city like no other, where voodoo and latin rhythms melded with R&B into something funky, his code-word for “felt good.” By the end of the show, the audience, on their feet, certainly did.