Home Art If You Grew Up In the Valley, This Museum Will Bring Back... 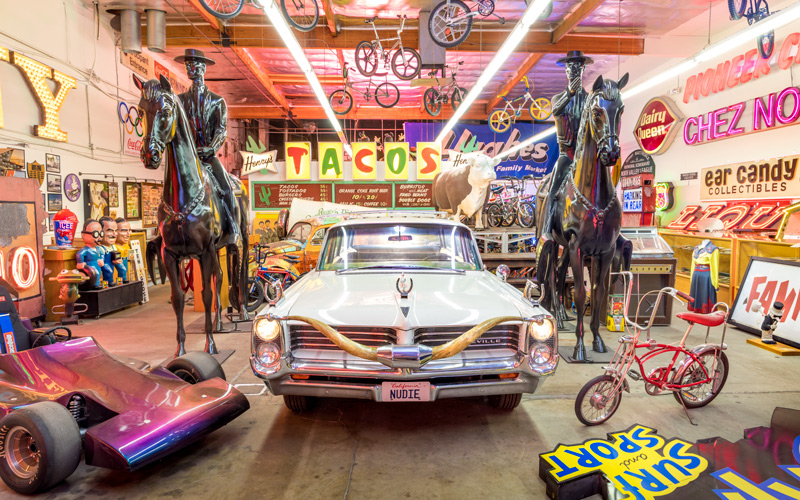 “The Valley deserves a museum,” says the 53-year-old. Gelinas opened the space in 2013 as a side project; he’s also the longtime owner of the Print Lab, a North Hollywood screen printing operation. “I want to preserve what’s left. It’s the missing pieces of the puzzle of who we are and where we come from.” One of nine children, Gelinas grew up in Sepulveda, a town that’s been erased from the map. (It’s now called North Hills because, you know, property values.)

Tall, tatted, and lanky with a shaved head, Gelinas is an overgrown version of an OP shorts-clad kid who rode his skateboard in drained Reseda swimming pools or trekked to the beach on the RTD with Vuarnets dangling from his neck and a Boogie Board under his arm. Mention his hometown and Gelinas rattles off long-gone landmarks. He recalls the giant slides and trampolines, the themed eateries, and Uncle Ben’s Kiddieland. The department store-filled Panorama City was “a miniature Beverly Hills.” As a kid, he says, “I didn’t think there was a life outside the Valley.”

Open from 10 a.m. to 3 p.m. on Saturdays (private tours cost $10 per person), the museum feels like a ginormous man cave. Weirdo pop culture artifacts sit crammed alongside legit historical materials, everything from the iconic sign from the beloved North Hollywood honky-tonk the Palomino Club to legendary rodeo tailor Nudie Cohn’s ultrasweet custom 1975 Cadillac to a booth and menu from the recently deceased Van Nuys steak-a-teria the Sherman Room to Gelinas’s latest score—the life-size mounted cowboy statues that marked the entrance of Porter Ranch.

Dozens of old-school BMX bikes hang from the ceiling. While Gelinas can tell you how many first-gen Camaros rolled out of the old GM plant in Van Nuys and about the mass of hi-fi makers that were rooted in the region, the history of the BMX bike has extra resonance for him: The dirt bike’s major manufacturers were based there. More important, a vintage Littlejohn Murphy BMX was his preferred mode of transport as a kid. Gelinas’s childhood adventures became the basis of his adult obsession. “I rode my bike all over the Valley and felt a sense of freedom, riding from Balboa and Roscoe to Sepulveda and Parthenia, to Larry’s Meat Market to get a dill pickle on the counter and down to Universal Studios,” he says. “Starting with this fascination of my childhood and what the Valley used to be—and the question of where did it go and why—it evolved into collecting large pieces of architecture, including signs and doors.” He acquires most of his artifacts for free via word of mouth (that Palomino sign sat in someone’s garage for years until its owner heard about Gelinas and offered it up) and by keeping an ear out for businesses that are shutting down.

Gelinas’s holy grail was the sign for the White Horse Inn, a Northridge institution dating from 1958 that closed in the late ’90s. It took him 15 years of cajoling to procure the sign, a process he posted on social media. In the virtual world he gained a huge following of like-minded individuals who responded with relics of their own, such as a photo of the Maharishi walking the campus of Taft High School in 1968.

When the museum opened, Gelinas wondered whether anyone would come, but nearly 2,000 people showed up. Now, he says, “it’s a destination. People feel like, Valley Relics—it’s the Valley. It represents what we grew up with. There’s a lot of pride in it. Still, I hate to see Valley history ripped apart. It feels really good to save it, but the truth is, I wish it had never been torn down in the first place.”