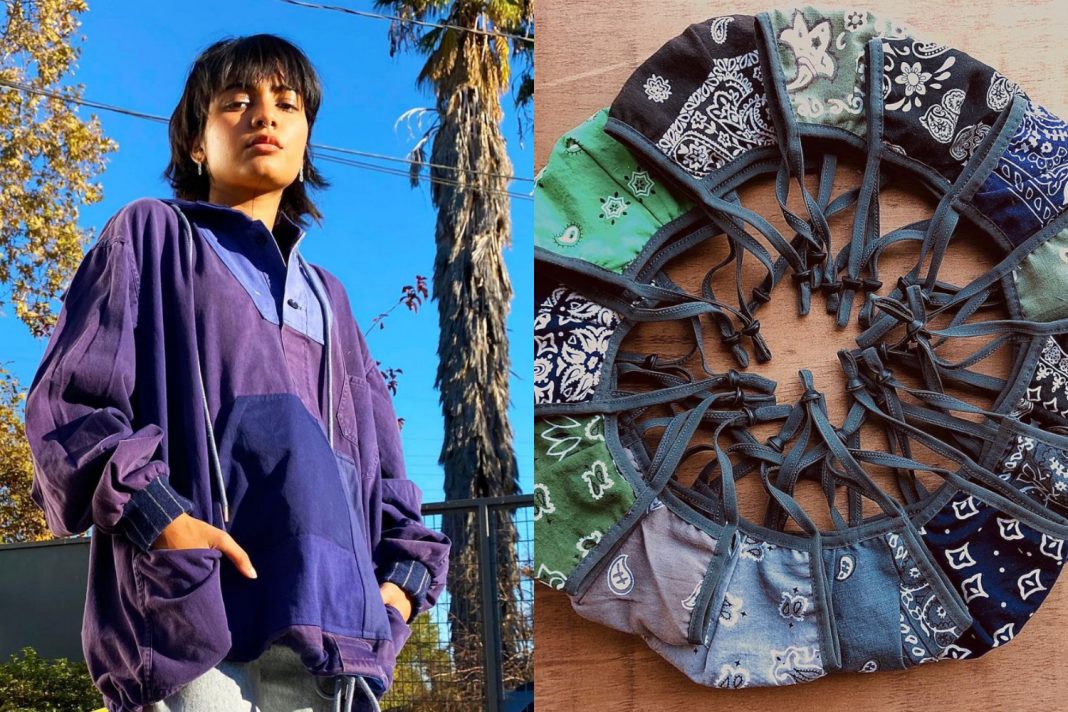 In early 2020, Frogtown-based sustainable garment- and accessory-production outfit Suay Sew Shop was set to work on a string of large upcycling programs with corporate partners that would take them into 2021. When COVID-19 hit, though, they quickly shifted focus. “We basically used all the money that we had in our bank account at that time, which wasn’t much,” CEO Lindsay Rose Medoff says by phone, and started research and development on making a high-filtration mask.

The masks came together with shop towels and the design was ultimately backed by Cleveland Clinic. To date, they’ve donated 220,000 of those masks to organizations like Seeding Sovereignty, Refugee Health Alliance, and Watt’s Community Core, as well as to schools, hospitals, protesters, and people in high-risk environments who’ve have contacted the company.

But, Suay didn’t stop with masks. They also launched a program called Know Your Grower, Know Your Sewer that provides fresh produce for garment workers affected by the pandemic and has fed 200 families weekly for the past seven months. More recently, Suay S.O.S. debuted as a means of bringing together the community to reuse and recycle textiles. Between 10 a.m. and 4 p.m. daily, locals can drop off old clothing—even the items with holes and stains—to Suay’s donation box. Items that are repairable will be fixed and given away on the shop’s free rack. Those that are beyond repair will be upcycled into new products. Another arm of this program is Save It Saturdays, where you can drop off clothing to be repaired for a reasonable price.

“This is who Suay has always been,” says Medoff. In the midst of the pandemic year, though, the young company’s activist side has moved to the forefront of their work.

Medoff has spent over 18 years working in remade fashion and, in the midst of that, took a turn towards organic farming. For almost seven years, she was an organic farmer in Idaho and New Mexico, while continuing to work on projects like sewing programs and returning to Los Angeles during off seasons for design or consulting jobs. In late 2017, Medoff and business partner Heather Pavlu opened up Suay Sew Shop to produce Patagonia’s ReCrafted line.

It’s Medoff’s background in both farming and sewing that inspired the Know Your Grower, Know Your Sewer program. “Finding a way to tie food into Suay was always the plan,” she says. “We were able to get there even sooner because the need became more urgent. ”

According to the Garment Worker Center, there are about 45,000 garment workers in Los Angeles. Fair payment and working conditions for garment workers has been an ongoing struggle and that’s compounded by the pandemic. “There’s been food scarcity in our in L.A. garment worker communities since the pandemic,” says Medoff, adding that the food boxes also show garment workers “that we care and we see them.” Customers can order a produce box for themselves, with a second box going to a garment industry family, or donate a box.

Similarly, accepting clothing donations was something that had been a goal for Suay. “Through the pandemic, we were able to recalibrate and strategize and pass on all corporate partnerships,” says Medoff. Right now, their mission is focusing on local textile waste. “We are focused on helping individuals participate in a community-based cleanup economy,” says Medoff. Part of that is what she calls “traceable recycling.”

“Currently when you drop your stuff off to a big donation center, you really don’t have true traceability of what really happens to your goods and how that can affect other people down the line,” says Medoff. “Our goal is to really give true transparent traceable recycling of as much as we’re capable of recycling with our team.” Their goal for 2021 is to recycle four million garments from Los Angeles County’s wastestream and, ideally, they’ll double that number the following year. Medoff envisions a free store stocked with repaired donations that Suay can take into various communities to coincide with educational talks about reusing clothing.

This year, Medoff is thinking about how Suay will grow sustainably into the future. Right now, there are 30 people working at the sewing shop. “We don’t need to be a 500-person team to really make an impact,” says Medoff, but she’s thinking about how a business can expand its programs while providing good wages for its employees and engaging in community-minded, environmentally sound practices.

Ultimately, Suay’s work is about encouraging others to take more active roles in caring for the environment and for each other. “I think often we’re told that it’s the corporations that really are going to have to do the work, to do the broader cleanup,” says Medoff. While she acknowledges that might be true in some instances, she says that it’s also a sentiment that takes away power from the people. When it comes to fostering change for social or environmental justice issues, says Medoff, “it’s our own habitual change that actually has a lot of the power.”