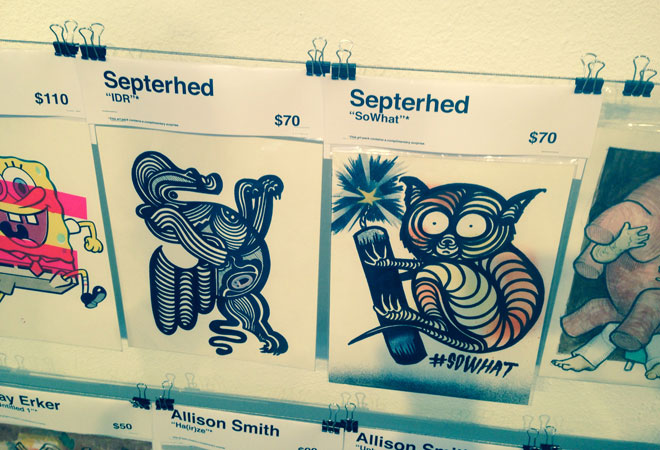 The Season of Spring at Flower Pepper Gallery in Old Pasadena caters to street art spotters who love and admire creative whimsy. Curator Daniel Rolnik has called upon his friends near and far and the resulting show is superb. This is your chance to let these artists know how much you appreciate them—and help them buy paint to keep on rocking.

WHO
Septerhed, Haunted Euth, Homo Riot, Isabelle Alfrod-Lago, Max Neutra, and Zio Ziegler are all well-known artists whose work graces city streets and alleys, from the eastside to the westside. Isabelle’s gorilla has made himself comfortable on Abbot Kinney. Zio’s mythical creature has somehow avoided the wrecking ball in Culver City’s former Branded Arts building. Septerhed is an L.A. staple who knows how to bring a wall to life.

WHAT
This is your chance to move a Septerhed piece from a Melrose wall to your living room. But act quickly because they won’t last long. All of the art pieces at Flower Pepper, which cost between $25 and $400, are cash and carry. Sweet, huh?