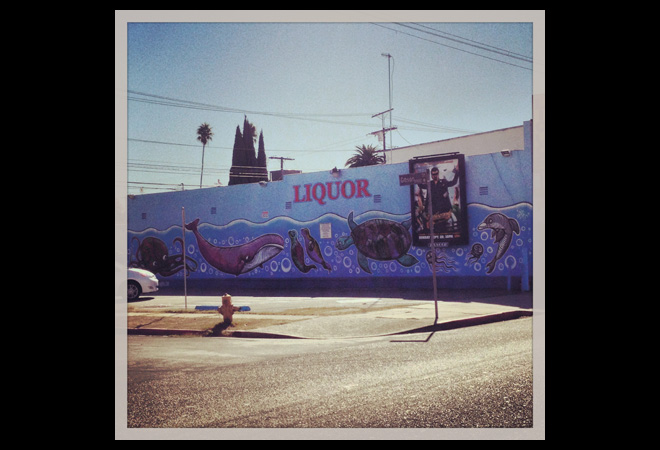 Septerhed tackles a bright blue wall with playful, creative energy. The result is part of a neighborhood coalition to “Beautify Robertson.” North of Third Street, Robertson Boulevard is Beverly Hills-worthy but it sure could use some love further south. Septerhead doesn’t disappoint.

WHAT: The blue basecoat at a non-descript liquor store screamed “ocean” and Septerhed brought it to life with an ambitious and intricate array of sea creatures including an octopus, a dolphin, and a jellyfish. He isn’t afraid to use bright pinks and pastels; when he mixes them with his sharp line work, the results are breathtaking. Known for his intricate line work and bright colors, Septerhed’s skill lies in is his ability to move quickly. The entire mural took him only a couple of hours to create but it has had a lasting effect on the neighborhood. It may even tempt you to hop on the 10 Freeway and head toward the water. Go west, young artist!

WHO: Septerhed’s work has graced walls and alleys near Melrose and beyond. He has a signature look and his work can be identified with nary a tag. It’s a combination of the way he makes his aerosol cans dance with color and still settle on a canvas. I’m partial to the turtle but you need to see the entire mural to appreciate it.

WHERE: On Robertson Boulevard and Gibson Street at Dave’s Liquor. It’s right near the Santa Monica Freeway in case the ocean beckons—and it will.