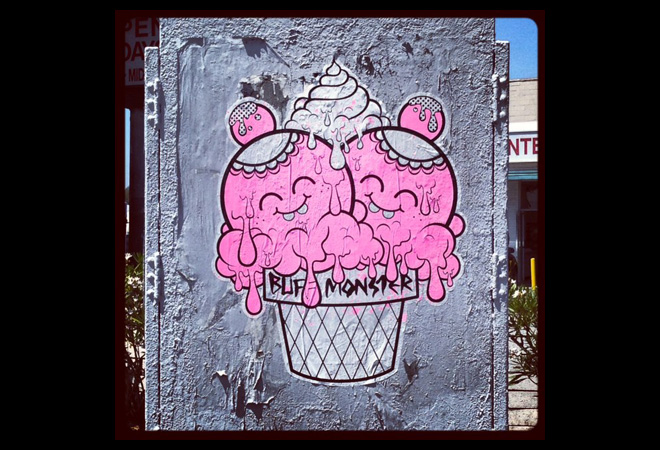 Buff Monster knows how to make viewers feel supremely happy. He often uses a bright pink color that recalls bubble gum and a sticky summer day. His lettering is playful and gooey with words that seem to melt into one another. Influenced by Japanese culture, he uses kanji when the mood strikes. Even then, his language is universal.

WHAT: The giant scoops of ice cream are silly and beg you to smile while you’re stuck in traffic. The scoops are smugly innocent at the same time that they’re sexual references, but don’t think too hard about what they infer.

WHO: Buff Monster wants you to have a good time and stop behaving so seriously. He wheat-pastes where you least expect it then patiently waits for a reaction. You can’t ignore his aptly named “Melty Misfits.” Pink is his prime color, a great juxtaposition with his moniker, “Buff Monster,” which suggests a virile, masculine aesthetic. He is working on a series of vinyl toys and wheat-pastes that are throwbacks to Topps’ Garbage Pail Kids cards. Go ahead and laugh. Buff Monster’s happiness is infectious.

WHERE: Spotted on an electricity box on the northwest corner of Fairfax and Pico, this piece of art is hiding in plain sight and has been up for a while although Buff Monster is back home in New York.