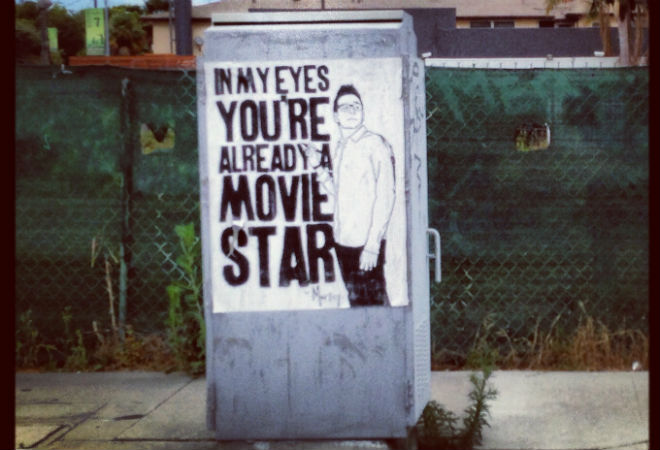 Morley’s musings take on nearly every subject: love, fame and everything in between. Usually found on highly trafficked streets, a Morley piece is fleeting. It goes down as quickly as it comes up.

WHAT: Morley’s wheat pastes always feature a self-portrait and a meditation, but the design process takes time. “Once I have the skeleton of the idea, I’ll sit down and figure out exactly how I want to phrase the statement I want to make and figure out if there is a way to illustrate that in a very basic way,” Morley tells Street Art Spotter. “How can I use the text itself to help illustrate my point? How do size and spacing of the words affect the way a person will read something? It gives the words a voice in your head.”

WHO: Morley hails from Iowa but has Los Angeles in his soul. He sees street art as a way to communicate his thoughts with the masses. “These days, it’s tough to discover anything beautiful that doesn’t come with a barcode or a release date somewhere in the corner. Street Art isn’t a flyer for your band’s show, it IS the show.”

WHERE: Spotted on an electricity box across from the Bagel Factory on Robertson Boulevard and Cadillac Avenue. This Morley has longevity; it’s been up for several months.

If you spot a Morley, take a picture, cc @SkateMamas and hashtag #Morley for the chance to win some sweet exclusive Morley stickers.