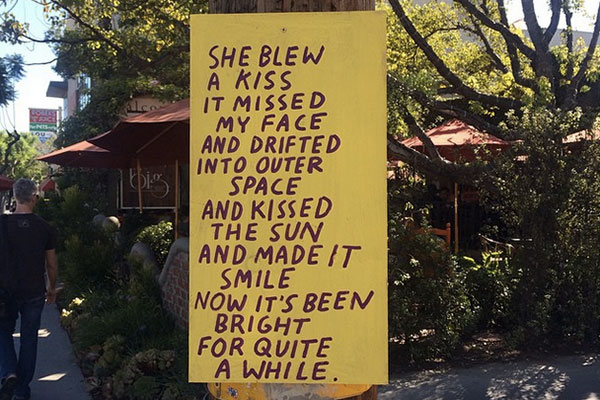 Dallas Clayton is a skateboarder and writer best known for the kid-centric An Awesome Book! Wherever he’s directing his creative energy, he seems to relish making people feel good. His inviting illustrations often feel like a giant bear hug.

WHO: Clayton isn’t afraid of hard work and he pursues his ideas. When his first book was turned down by publishers, he self-published it to plenty of acclaim. This turned into a deal for several books and a foundation to promote literacy around the world. Clayton is all heart.

WHAT: Signs with short, powerful affirmations are popping up all over the city. They bear Clayton’s handwriting and signature color palette: black on yellow. The goal isn’t merely to make you think but to inspire you. Clayton is all about dreaming big—and encouraging everybody else to do the same. Hopefully these signs will jumpstart a few imaginations, or at least to get people to look up from their phone.

WHERE: Spotted on a tree in front of Alcove Café on Hillhurst Avenue in Los Feliz.