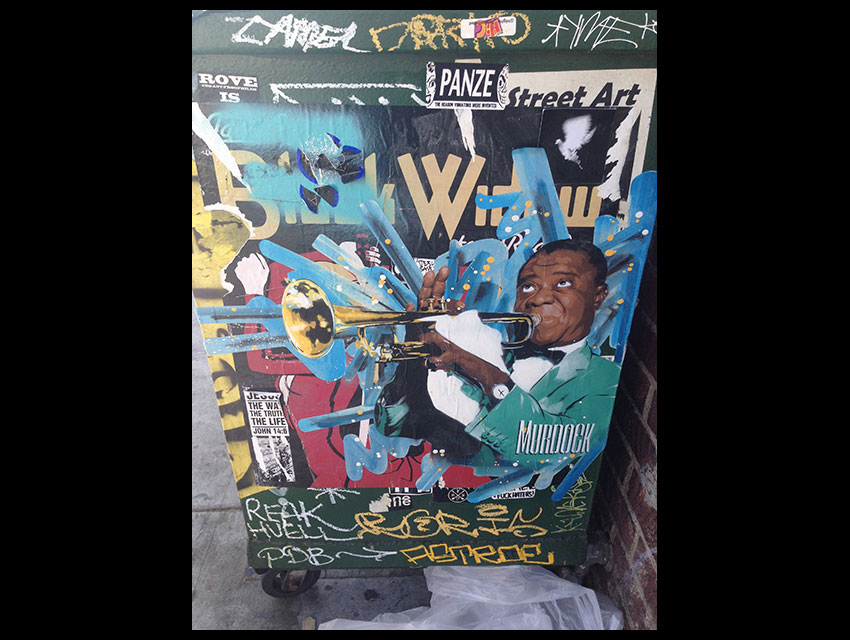 If Murdock‘s wheatpastes seem familiar, that’s no coincidence. He often finds inspiration in the faces of prominent artists. Rendered with little more than an exacto knife, his detailed, multilayered stencils allow for shadow play and three-dimensional undertones.

WHO: Little is known about Murdock, but his name seems like a clever play on media magnate Rupert Murdoch. Then again, it could simply be a coincidence. Maybe that’s the point. As consumers we rarely know the full intent of the messages that bombard us. The sight of Frida Kahlo marching down Hollywood Boulevard bearing a basket of spray cans, another favorite Murdock piece, is so anachronistic that it works.

WHAT: This portrait of trumpeter Louis Armstrong was created with stencils then transferred onto a trash bin via wheatpaste. It’s a beautiful piece yet it seems slapped onto the can as an afterthought, as though it’s begging to be forgotten. But once you make eye contact with the jazz legend he’s hard to forget. There he is serenading you in the Arts District and it seems like fate.

WHERE: In front of The Pie Hole, on Traction Avenue