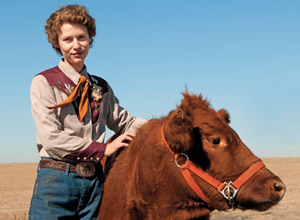 Sunday night at the Golden Globes Claire Danes scooped up yet another award for her portrayal of autism pioneer and animal activist Temple Grandin. Grandin had on her best cowgirl finery and when Danes’ name was called in the “Best Performance By An Actress In A Mini-Series Or Motion Picture” category she bestowed not one but two enormous hugs on the actress (if you saw the moving film you would get teared up by the hugs themselves—Grandin had to learn to accept and enjoy being touched). Danes beamed backstage holding her award, “She’s mastered the art of hugging,” she said of Grandin. “It’s surreal to share the experience with the woman you played. She’s so kind. Before my category came up she said [Danes broke into character] ‘I really hope you win!'” Our September issue featured an autism package that offered many different perspectives on the disorder. Take a look at our primer.