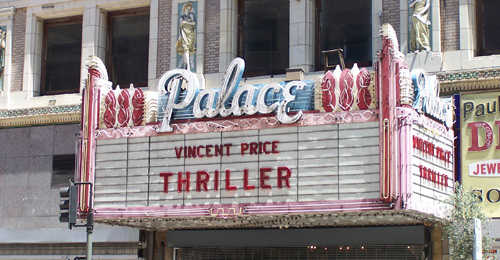 I literally shrieked and slammed on the brakes when I saw it. The Marquee for the Palace theater on Broadway has had a lot of letters on it since 1911, but seeing “Vincent Price Thriller” up there was like some great movie moment brought to life. I like Michael Jackson as much as the next kid of the ‘70s and ‘80s, but the first time I saw Thriller – it was an event! I remember the countdowns on MTV and sitting down in front of the set that Friday night in 1983 to watch the fourteen minute mini-movie. I was also just beginning to explore historic places: my dad lived on the same Angelino Heights street as those zombies and I had recently seen the Broadway theaters for the first time – It was all so exciting and new to me. When I drove by and saw those letters up there, what the theater owners intended as a simple tribute to MJ, it was like seeing James Dean at the Observatory or Harrison Ford at the Bradbury building.