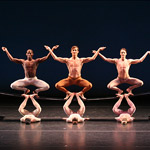 For its inaugural presentation this weekend, the new Wallis Annenberg Center for the Performing Arts is hosting the Martha Graham Dance Company. Talk about a coup—or starting off on the right foot. Graham has been called the mother of 20th-century modern dance, and her world-renowned troupe, formed in 1926, has produced inventive, fluid works that continue to captivate students and scholars alike. Except for appearances in Costa Mesa and Pomona in the last few years, the New York-based group has not performed in the Los Angeles area for nearly a decade. Graham, though, spent her formative years here: In the early 1900s, she studied the contemporary technique at the L.A.-based Denishawn School of Dancing and Related Arts. On the program November 8 and 9 are three works that reflect her choreographic range: Prelude and Revolt (which includes her signature solo, Lamentation), Maple Leaf Rag, and Chronicle. We spoke with artistic director Janet Eilber about Graham’s L.A. legacy.

How did this city help influence Martha Graham’s artistic style?
The influence of Ruth St. Denis and Ted Shawn [of the Denishawn School] was huge for Martha, and she credited them throughout her career for aspects of her work. She moved to Los Angeles as a young teenager. She was born in Pittsburgh, so when she got here, she was intoxicated by the light and space in California. I think you see that influence in all of her Americana work. Los Angeles inspired her idea of American space.

How do you feel about the company returning to Los Angeles to perform?
Our Wallis engagement is both a return to our roots and a chance to celebrate our new vision. It feels like we are being rediscovered. People who remember our company 20, 30, and 40 years ago will be surprised by the vigor of the new Martha Graham company.

Why did you select this brand-new venue for your return?
They invited us—and very thoughtfully so. Martha is pretty much the foundation of all 20th-century dance and beyond at this point, so if you launch a theater with roots, there is so much connection for all of the offerings after. I think that Los Angeles is the cradle of modern dance through the Denishawn School, including Martha, Doris Humphrey, Charles Weidman, and even starlets like Louise Brooks. Ruth St. Denis and Ted Shawn heavily influenced nonverbal communication—not only as it flowered into modern dance, but into film as well.

Lamentation, choreographed in 1930, continues to resonate with audiences. Why?
Because Graham stripped communication and movement down to the essence, and therefore it is timeless. There is nothing about it that dates it to 1930. That is the hallmark of her revolution—she wanted to find the primal gesture that would evoke emotion, and Lamentation is a perfect example of that.

The performances this weekend are a mix of the humorous (Maple Leaf Rag, from 1990) and the serious (Chronicle, from 1936). They also represent works choreographed decades apart. How did Graham’s message and artistry change over time?
She simply was so in tune with the social-political atmosphere of any generation that her expression naturally changed with the times.

What do these pieces aim to convey?
The human condition, and that is why they are so timeless and classic. We recognize ourselves in Martha’s work.

How do the dancers with the company today interpret Graham’s choreography?
They interpret it as 20th-century artists and athletes, and they bring their own times and their abilities to the choreography. Martha lived long enough to see generations of dancers develop and incorporate their energies into her work. Two of our dancers were among four who were just nominated for the Clive Barnes award. One of the nominees is on the cover of Dance Magazine this month.

What else can we expect this weekend?
People should not feel as if they are coming to a museum but will be seeing some of the world’s top artists onstage. Prepare to have your socks knocked off!