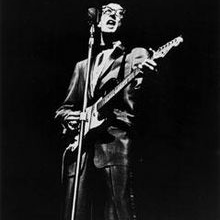 On what would have been Buddy Holly’s 75th birthday, Stevie Nicks, Graham Nash, Lyle Lovett, James Burton, Shawn Colvin, Michelle Branch, Phil Everly, Bob Scaggs, Chris Isaac, Gabe Saporta and Victoria Ashe got together at the Music Box in Hollywood to pay tribute to the late singer-songwriter, who famously died in a plane crash at 22 years old, by playing just some of Holly’s enduring hits.

Nicks kicked off the concert, which was organized by Peter Asher and taped to air on PBS this December, with a rocking performance of “Not Fade Away.”

From there the program covered “Take Your Time” (performed by Nash), “Everyday” (performed by Patrick Stump), and “Crying, Waiting, Hoping” (performed by Isaac) among other songs plus video messages from Brian Wilson, Keith Richards, Ringo Star, Jackson Browne, Natalie Merchant, and Imelda May.

The artists, who formed a kind of mutual admiration society, acknowledged the profound influence Holly had on rock and roll and their own music, and clearly enjoyed playing his songs, all of which were written or recorded in a remarkably short 18-month period.

“In two or two-and-a-half minutes he could teach us everything we need to know about life and love,” said Lyle Lovett.

Peter Asher remembered a different aspect of Holly’s success and now-iconic look. “A rock star with glasses?” he said, “Are you kidding me?”