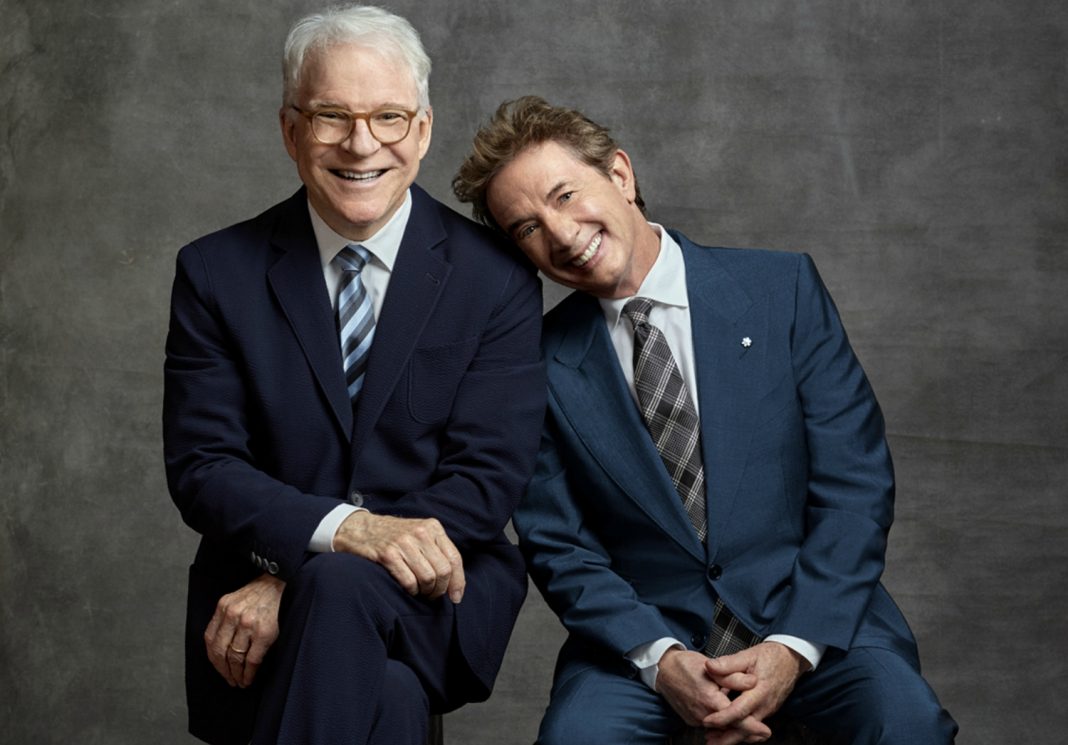 Like it or not, Steve Martin and Martin Short are now elder statesmen of comedy. Both survived the wild 1970s—Short as a manic cast member on Canada’s SCTV and Martin as a form-bending stand-up—and forged enduring careers at the movies and on the small screen, somehow managing to avoid scandal and remain lovable into their seventh decades. (To be fair, Short doesn’t turn 70 until next year.)

They’re on those screens much less these days, but a few years ago they decided to take their respective schticks on the road as a comedy duo: Short sings mock-Broadway tunes, Martin plays the banjo with the Steep Canyon Rangers, and they tell jokes and playfully rib each other.

The two met in 1986 while making Three Amigos, and they’ve been buddies ever since. That dry-aged friendship (“We’re like Donny and Marie without the sexual tension,” Short likes to say) translates into an endearing and very funny hang sesh for their audience.

Ahead of their show at the Greek Theatre on Tuesday, July 16, Martin and Short spoke with us by phone—breezily oscillating between tongue-in-cheek barbs and genuine affection—about their evolving double act, why they can still stand each other, and whether or not comedy ages.

Will this be the same show that you’ve been doing?

Martin: Different, mostly, from the one on Netflix, if that’s what you mean. I think the audience there will think of it as like 90 percent new material.

Short: They’ll be wrong, but they’ll think of it that way.

How has the show changed since you first started doing it?

Short: Well, we started off doing interviews with each other. I had a show and Steve had a show, and we started to amalgamate the best parts of each show, I guess—but also creating its own shape. And we’ve been doing it now for years. I can’t even remember the old shows.

Martin: Yeah, well the old show was… we didn’t have a show. [Both laugh] And then we combined our shows—I had a sort of comedy-music show, and Marty had a comedy-music show. When we first started doing it, I didn’t feel like I was holding up my end. That’s when I asked my band to come on, and that increased the comedy material that I could do, and I got my own section with the band. That’s when it really started to become a real two-man show.

Is the goal to rewrite it or change it on a regular basis as you continue to take it out on the road?

Martin: That’s always a subconscious goal, is to always be adding, and always be updating. We just do it regularly—we never drop that. We never think, “OK, it’s locked.”

Short: But you’re also aware that you can’t just do it for yourself. You’re doing it for the audience. So if you had a ten-out-of-ten joke, maybe you’ve done it for seven years—the audience hasn’t heard it. So do you cut it just because you’re tired of it?

I imagine there are only so many people that each of you would be willing to spend this much time with. I’m curious why the other guy makes the cut?

Martin: We get along, and we have always gotten along—without really a lot of effort. We joke with each other. We have been on vacation together with our families. It’s just never been stressful, it’s always been a lot of laughs. And then as we became, in a sense, a team, we discovered that our working style was kind of angst-free. So it’s kind of a perfect combination, especially at my age, you know—’cause it’s fairly easy to do, and really fun to work on.

Short: I think the operative word is: the hang is fun. No one is trying to cover the rent, no one’s trying to get more people to say “We like ya.” It’s not about that. It’s when you are continuing to have a riot when you work. If it wasn’t that case, we would have done it and then not continued to do it. But all of us—the whole band, [musical director] Jeff Babka—we’re all having a great time together, off during rehearsal, and after the show. That makes the show more joyful.

How would you guys characterize your relationship? Is it brotherly? College dorm-mate?

Short: If you were my college dorm-mate, I want a new dorm-mate.

Martin: I was going to say it’s more like college dorm-mate than brothers. I’d say brothers is definitely not it, ’cause you have brothers.

Short: Well, how do you know? You don’t have any brothers.

Martin: But I’ve been around—I think I know what that means. We don’t do pranks on each other, if that’s what you mean. We love to gossip, and there’s really only one problem with gossip: eventually you run out of gossip.

Short: Never. Not with our memories.

Is the desire to kill each other ever there, like it is with a brother?

Short: No. Not remotely.

Martin: No, not at all. And that raises the question: Do you ever want to kill your brothers?

Short: Yeah. I think you revealed a little more than you hoped. [Martin laughs] But I would say that, truthfully, going back to my answer: if I wanted to kill Steve because he’s driving me nuts, we’d stop the show. We wouldn’t do it anymore. It’s a testament to how we get along.

Is there an annoying habit or character trait you’ve learned about each other through this experience?

Short: Steve sometimes plays the banjo, and that’s difficult for me. [Martin laughs] But other than that, not much.

Martin: Actually, for me there’s really nothing. You know, I never think: Where is that annoying little shit? I never think that.

Martin: Yeah…it was right on the tip of my tongue. I did not have to search for it.

Have you guys ever had a bad show, in terms of an audience not responding or something going wrong?

Short: I’ve learned through the years that there’s no such thing. What you think is a bad show was, maybe the audience was just quieter but loving it. So, no, I don’t think we’ve had bad shows.

Martin: The only thing that comes close to what we think of as a bad show was when it’s outdoors, and the audience is in the direct sun, and it’s 110.

Short: You’re aware when your audience has the sun on them, and also when they’re screaming “Boo.” That’s when you know you haven’t done your job.

Do you think that what’s funny today has a shelf life, or that comedy ages differently than other things?

Martin: That’s a good question because, yes, comedy does age—but it doesn’t necessarily age. You know, we’re still laughing at Charlie Chaplin. But, for example, comic essays from the ’30s and ’40s kind of lose their luster over time. But, you know, on Sirius XM I’ll listen to old comic radio shows, and Jack Benny really holds up. You know who Jack Benny is? Are you old enough?

Short: Yes, I do. I remember him, Steve.

Martin: I called Marty and I said, “I just heard this joke on Jack Benny. And I still laugh at it.” Jack Benny’s known as notoriously cheap. And Dennis Day, who works for him, says: “Jack, I’d like to ask for a raise.” And he said, “Well, how much are you getting now?” And Dennis Day says, “Nothing.” He said, “Nothing?? Don’t you get a check every week?” And he goes, “Yeah.” Says, “Do you cash it?” Dennis Day says, “Oh…” [Both men chuckle]

Short: I think it’s an ongoing question that is a fascinating one. Why is it that W.C. Fields or someone like that, we show it to a 10-year-old kid and they laugh hysterically—and then other things sit there?

It makes sense that anything that has overtly cultural references or is very time-specifically topical would sort of expire after a certain point. But it seems that even just certain senses of humor don’t translate across generations…

Short: But if you cut together a “best of” the Three Stooges and mix in a little Charlie Chaplin and show them to any classroom, a 9-year-old will laugh hysterically.

Short: And so will a 15-year-old. Nichols and May are as funny when I first heard them when I was 12 as today.

I’m curious about your own work—Three Amigos, for example, since that’s when you guys met. Have you noticed whether the people who want to talk about it have continued to get younger? Or has the audience for that movie aged along with it?

Martin: I don’t know, because I don’t really talk to people about my movies. [Short laughs] When you’re doing a movie like Three Amigos, I never thought it would become… not a classic, but a kind of standard. Or even Planes, Trains, and Automobiles. I never thought that—and I couldn’t even tell you why. And then other things just seem to vanish from sight. It’s inexplicable.

I was reading some of the reviews of your show, and some of them seem complimentary in a backhanded way. One that I came across described the show as “grandpa humor,” or a bygone type of comedy. How do you feel about that?

Martin: I haven’t seen those reviews. It that reviews of the Netflix show?

Short: I think you did a little searching to find the question, which is fine. But I don’t think that’s an accurate statement. I mean, it’s so not that. I don’t know what that joke is, other than we’re older.

Martin: That could be it. Look, anyone can say anything. If you want to look up “grandpa” related to Steve Martin and Marty Short, you’ll find it. But it could be because, one, we are older, and two, because we’re mostly not dirty, and we don’t use language a lot–rough language. Although a lot of new comedians aren’t using swear words. But I don’t know how to describe it. All I know is the audience is laughing. I don’t know if it’s a dad joke or whatever, but we know our audience enjoys it. The people who come to see us are already, by definition, interested. The people who watch Netflix may or may not be.

Do you think that everything that starts out as hip and edgy eventually becomes a bit tame or domesticated?

Martin: Well, I’ve always understood and always said: you can only be new once. And when you’re new, you’re very exciting, and they’ve never seen it before. And then, ten years later, they’ve seen it. So you change yourself a little bit, but you don’t want to remake yourself into a younger person. That just even looks sillier.

Steve Martin and Martin Short perform at the Greek Theatre on Tuesday, July 16 at 8 p.m.

See What Happened Inside the Golden Globes After-Parties