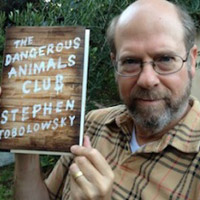 Stephen Tobolowsky has cheated death — twice. When he was 25 and living in Dallas, he ventured into a grocery store to purchase some chicken and mangoes for a party and got held up at gunpoint. He escaped by babbling non-stop for 45 minutes, then inviting the gunman over for dinner. In 2008, while horseback riding in Iceland, an ill-tempered steed threw him onto a lava flow, breaking his neck in five places. The enforced immobility and horror at nearly leaving his two sons fatherless inspired him to write down his early experiences, with the former eventually forming a story called “The Light of the First Day.”

The result was a podcast: The Tobolowsky Files, a meandering series of true tales narrated in Tobolowsky’s warm, slightly nasal tenor. The Dangerous Animals Club, his book of essays based on the first 25 episodes of the podcast, was published September 25 by Simon & Schuster.

Who is Stephen Tobolowsky, you ask? Most famous for his turn in Groundhog Day as cheeky insurance agent Ned “Bing!” Ryerson, the prolific character actor has racked up so many TV and film credits even he has trouble remembering them all. He has played another creepy Ryerson (Sandy) in Glee, a Ku Klux Klansman in Mississippi Burning, and an amnesiac killer in Memento.

The Dangerous Animals Club (named after a childhood pact with a friend to collect the creepy-crawliest creatures they could find) isn’t a dishy tell-all by a Hollywood insider. It deals with “the beginnings of things,” Tobolowsky says — first love and heartbreak, early efforts to break into show business, and the sometimes hazy line between perception and truth.

That last one, especially, preoccupies him. Tobolowsky ascribes to the mantra, “true trumps clever.” In the essay “Conference Hour,” he relates how an older teacher tried to run him out of college when he was 19. Listeners of the podcast version wrote letters:  Where was the part where he leaped onto a desk and proved he couldn’t be pushed around? That scene never happened, Tobolowsky says. “A kid doesn’t stand up to an authority person except in the movies. I don’t try to add those little pieces that make it a better story. The story is what it is.”

That’s not to say they’re dull. Tobolowsky’s narratives have a haunting, elliptical quality with motifs that circle back when you least expect it—one of the advantages, he speculates, of never shooting scenes in order. Above all, they’re humane. “A lot of humor comes from people realizing they lived through the same thing. It kind of appeals to the Encyclopaedia Britannica part of someone’s brain, like watching the nature channel.”

In case the book doesn’t satisfy your craving for all things Stephen, he just signed a contract with Public Radio International to offer The Tobolowsky Files in an expanded format, and the audio version of The Dangerous Animals Club is already underway. Oh yes, and he’s in a new TV show, The Mindy Project, which premiered Monday on Fox. A new book and a new show in the same week? Everything’s coming up roses.