Home Film Out of Step with Movie History 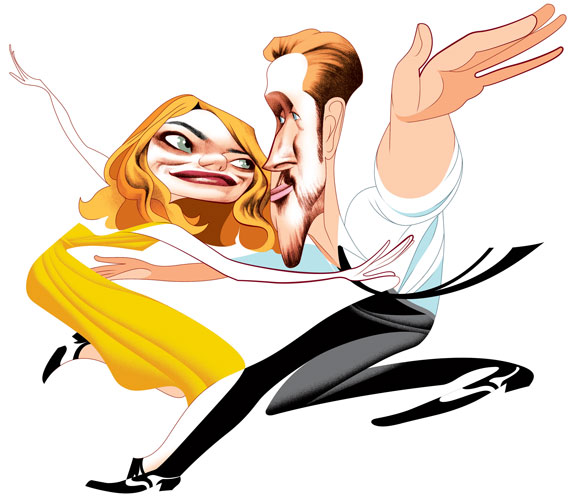 Aren’t musicals stupid? Aren’t they so constrained by their conventions that the best they can do is fetishize the artifice that makes them stagy and inert? Didn’t they exhaust their cultural resonance sometime around 1961’s West Side Story, or maybe I mean 1953’s The Band Wagon, or maybe what I really mean is 1952’s Singin’ in the Rain, the genre’s one unassailable stroke of genius because you can omit all the music (which admittedly is pretty good) and still have a witty satire of the movies, including musicals? That the form always strains to justify itself, balancing varying degrees of preposterousness that are bound to take you out of whatever dramatic or comedic framework was constructed to contain the music, can’t help raising questions as to whether the effort of creating or watching it is worth it. Singing early-20th-century gangsters in Chicago, which tries to be dangerous and is just lame! Singing 19th-century Parisian revolutionaries in Les Misérables, which is lifeless once Anne Hathaway finishes stealing her Oscar with the movie’s only exceptional song, “I Dreamed a Dream”! Singing wannabe actors (as directed by Damien Chazelle of 2014’s woefully overrated Whiplash) dancing on their cars in this year’s La La Land, which…which…

Which is sensational, actually.

Back in the day, the first eight Oscar shows I watched on TV as a kid awarded their top prize to musicals four groan-inducing times. Among these was Oliver!, which came out in 1968, the single darkest year of the last half of the 20th century: Following 12 months of riots, assassinations, Richard Nixon’s election, and the Tet Offensive, an Oscar for Oliver! (over 2001: A Space Odyssey, which wasn’t nominated) couldn’t have seemed more clueless; I suspect some people reading this will never have heard of it, let alone seen it. Nearly half a century later the movie academy likes to suppose it’s hipper and may—considering not only last year’s all-white awards but the elevation to the presidency of a quasi-gangster endorsed by the Ku Klux Klan—feel compelled to confirm this. And should it come to pass that the racially conscious Fences or Moonlight or Loving wins Best Picture as the result of an impulse on the academy’s part to address a meaner era, I would not only fully understand but embrace it. The irony, however, is that after the long history of vacuous waddling musicals triumphing over leaner, edgier pictures, this time it is the musical in the running that’s the most deserving of the bunch.

If I could overcome my pathetic inability to write in the sort of sound bites that sweep movie advertising like locusts (I’ve been quoted exactly twice in 16 years), I might call La La Land the “best Hollywood musical since Singin’ in the Rain!” or something comparably excitable. But let’s settle instead for pondering how woefully underrated director Damien Chazelle pulled it off. In a genre-busting season distinguished by the noir western Hell or High Water and the brainy science-fiction epic Arrival, and avoiding the nitwittery of Whiplash that insisted jazz genius Charlie Parker was great only because he was bullied into it, Chazelle doesn’t sidestep musical clichés but triples down on them. That bravura opening of aspiring young movie stars caught in their own traffic jam—pirouetting across automobile rooftops on the 110 freeway—goes beyond the preposterous into the laughable and then beyond the laughable into the how-the-hell-did-they-do-that euphoric. Chazelle loves the clichés, reminding us in La La Land why we once loved them and how they became clichés in the first place. The movie is smart enough to have a modicum of meta self-awareness while guileless enough to hang onto its heart as exemplified by Emma Stone, who gets an able assist from Ryan Gosling. The music by Justin Hurwitz is at once confidently old-school and instant-classic timeless, and the dazzling production design interchanges the Los Angeles of our waking hours with the L.A. of our dreams as easily as twilight slipping into dawn.

La La Land ’s apotheosis confronts the academy with a paradox as perennial as 1982’s Gandhi versus E.T. the Extra-Terrestrial and 1990’s Dances with Wolves versus Goodfellas or, put another way, relevantly high-minded Oscar winners you never watch again versus escapist Oscar losers you watch all the time. Of course I’ve stacked the deck here. In retrospect, casting La La Land as an underdog in any way, shape, or form may prove ludicrous when it turns out to be the Oscar juggernaut it’s looked like ever since the Toronto International Film Festival a country’s lifetime ago, before Lincoln’s America 2.0 invented at Gettysburg gave way to the current 3.0 of recent electoral rubble. Maybe the lilting luxury of a valentine to dreams and dreamers’ well-worn trajectories is one we can’t afford or, worse, don’t deserve anymore; whether or not we deserve La La Land, it probably deserves better than us.

Best Hollywood musical since Singin’ in the Rain.