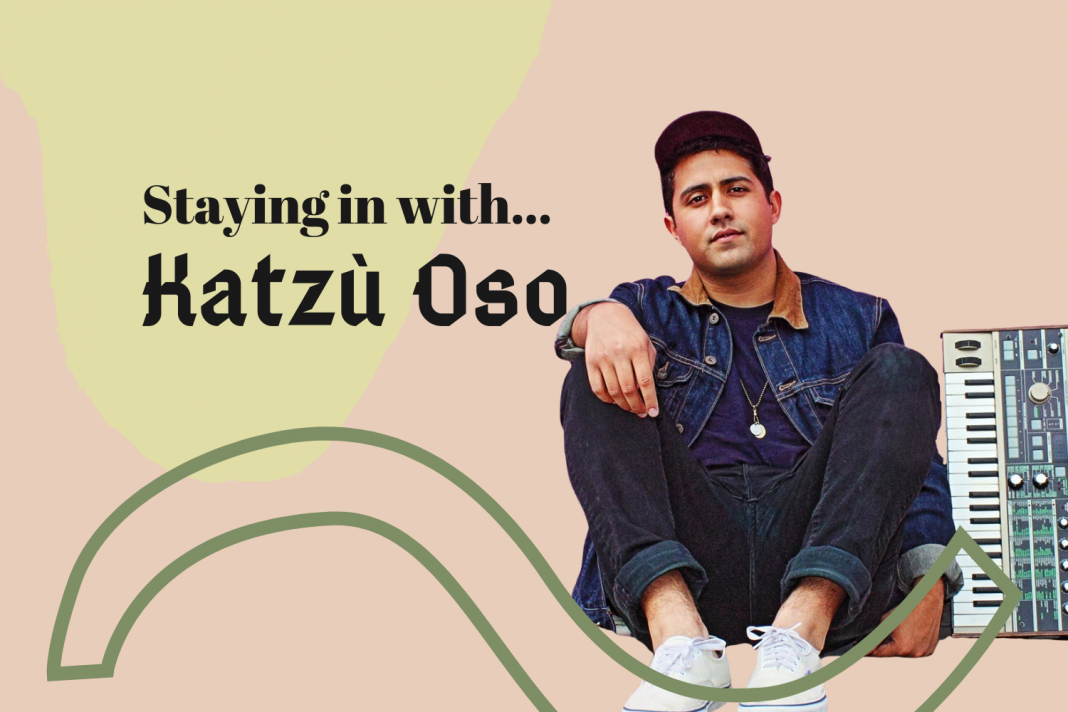 For our Staying in with… series, we ask interesting people what they’re watching, reading, and listening to while we all stay at home. In this edition: Katzù Oso. Find more in our Inside Guide.

Katzù Oso (aka Paul Hernandez) is based in Montebello, and credits the sunny, California vibes with informing his dreamy synth-pop sound. Before staying at home, the indie artist was sharing concert and festival stages with Cuco, Omar Apollo, and BROCKHAMPTION–but for now, he’s performing livestream concerts and focusing on making new music from his home studio. In late April, he released a new track, “In Too Deep,” and he’s gearing up to drop another, “Secuestro Al Corazón,” on May 19.

Katzù Oso Is Staying in With…

I’ve always been intrigued by both the good and bad behind-the-scenes stories of an artist’s life. This podcast pretty much tells you about all the crazy shit musicians did back in the day, from the Beach Boys hanging out with Charles Manson and his Family, to Keith Richards getting arrested over drug trafficking. If you love true crime and music then you’ll definitely love Disgraceland. I personally recommend the Beach Boys episode—it’s quite something!

I’ve gotten really hooked on this app recently! It’s a handheld version of the famous Minimoog synthesizer! This is the synthesizer used in so many classic songs like Michael Jackson’s “Thriller” and provided the soft organ-like sound on “Here Comes The Sun” by the Beatles. The Minimoog is one of my favorite synths but I don’t own one just yet. The synth itself has some great presets and virtual knobs so you can create your own sound, this is perfect for creating on the go. Moog was offering this App for free in the App Store during this quarantine so go check it out!

Movies: Everything from A24

I’m a huge horror fan and lately I’ve been on a bit of a streaming binge with A24 films. I watched Hereditary not too long ago which then led me to watch Midsommar. Falling down the rabbit hole I followed with It Comes at Night and before I knew it I was
hooked on these stories. For those who don’t know, A24 is an American independent distribution and production company that helps independent filmmakers get more recognition for their work. They fluctuate with genres, so it’s not only horror. Another good movie I recommend is Mid90s, a lot of these scenes took place in the city I grew up in so it was cool to see on the big screen. I can go on and on about A24 films but there are just too many movies to keep naming so any pick should be a great watch.

Growing up, I was never a huge gamer. I would’ve rather listened to music or picked up the guitar than play video games. So it’s really odd for me to sit here and tell you guys about my new addiction, but this game is just that much fun, especially during times
like these. The best part about the game has to be the feature to jump online and invite your friends to come over and hang out with you. From catching wildlife to building a museum, this game makes quarantine go by a lot quicker and social distancing so much
easier.

After 60 Years, Tito’s Tacos Is Offering Something New

What to Stream This Weekend: Somebody Feed Phil, On the Record, and More