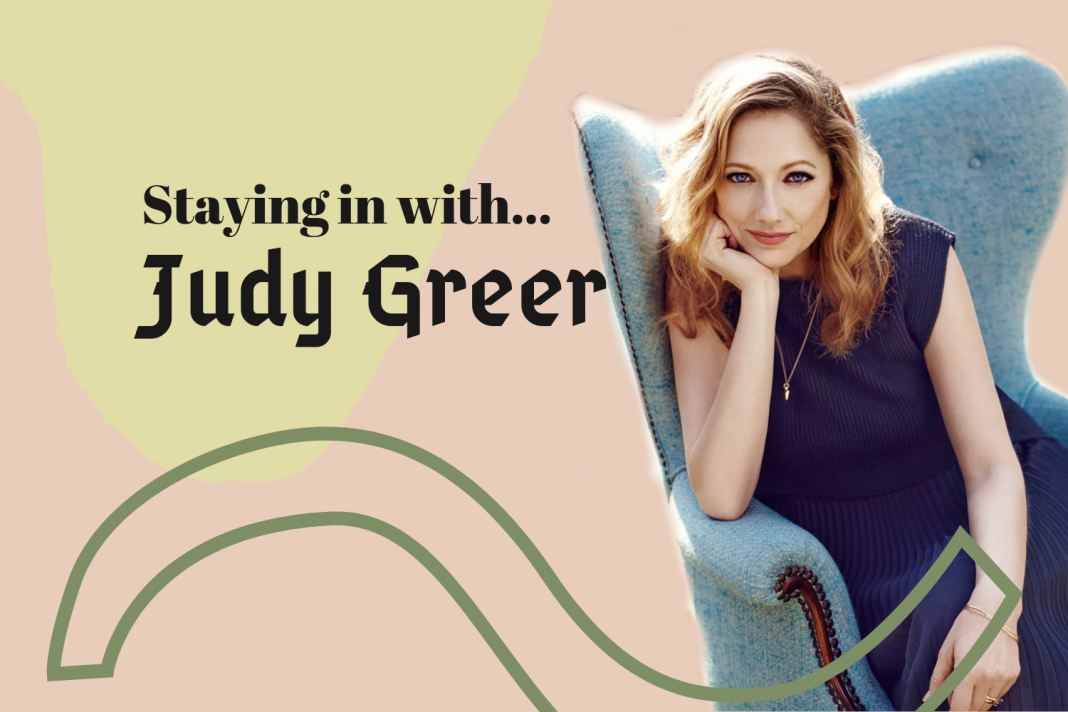 For our Staying in with… series, we ask interesting people what they’re watching, reading, and listening to while we all stay at home. In this edition: Judy Greer. Find more in our Inside Guide.

Judy Greer has not been making banana bread or embarking on DIY beauty treatments while staying in.

“I’m not baking sweets,” declares the actress. And, “no haircutting, no hair dying, no crazy nails.”

Instead Greer, who stars in Blumhouse Television’s Good Boy, premiering on Hulu on June 12, has been crafting, exercising, and catching up on classic films. The latest installment from Hulu’s Into the Dark series, Good Boy centers on a woman who gets an emotional support pup to help with her anxiety, only to find that Fido goes to horrific lengths to protect her.

“You look at the dog and you just think, there’s no way this little creature, this beautiful little dog could ever do anything harmful to anyone And yet—dot, dot, dot,” Greer has said of the film, which also stars Steve Guttenberg and was directed by Tyler MacIntyre and written by brothers Aaron and Will Eisenberg.

Here, a look at Greer’s life on the inside.

[I’m] hitting my “stash” hard these days. Working on Jessie Maed’s Framework Bralette with Stitch Party’s hand-dyed Jimmy DK yarn. This is very knit-nerdy of me. Also pulling yarn for Park & Knit’s the Incredible Bulk cardigan. Haven’t narrowed down the colors yet. I could write about this all day, so I will spare you and stop. P.S. Knitting is a kick-ass thing to do during quarantine if you’re gaining weight from all the banana bread, but still want to feel like a pioneer person.

It’s some heavy lifting, and, I will be the first to admit, some of them feel like taking our medicine, but we are plugging away at the list. Really loved rewatching One Flew Over the Cuckoo’s Nest and The Godfather. I’ve heard people say that The Godfather: Part II is better than The Godfather, but I think they are wrong.

Yes, I watched Tiger King, but it has been totally eclipsed by The Last Dance. Holy hell is that good. I was living in Chicago during that time and I will never forget the electricity buzzing around that city. I wasn’t even a sports fan then, but it was impossible not to get swept up in it.

I’m determined to come out of this healthier and stronger! I’m addicted to LEKFit streaming workouts. I invested in the good mini-trampoline (trust me, I tried to cheap out in the beginning, but it ended up being a bust. Just save up for the good one, or keep your eyes peeled on Craigslist, that’s where my friend found hers at half the price!!) The workouts are fast and fun and, best part, THEY WORK.

Tupac Exhibit, ‘Everybody’s Talking About Jamie’ Musical, and Other Best Things To Do in L.A. This Weekend