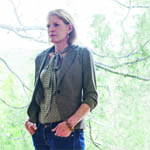 Marisa Silver had seen the photo dozens if not hundreds of times: a young woman—her face weathered but still beautiful—with two small children shyly clinging to her. Beyond that, she knew nothing about “Migrant Mother,” Dorothea Lange’s 1936 image from Nipomo, California. That’s how the Oklahoma native in the photo had wanted it. An anonymous symbol of suffering and devotion during the Great Depression, Florence Owens Thompson revealed her identity only in 1978, a few years before she died. “Why?” wondered Silver, the author of The God of War. “Was it shame?” The image, at once revealing and mysterious, inspired Silver, who lives in the Hollywood Hills, to write Mary Coin.

Set in Central California during the Dust Bowl exodus, the story is built around the fictional character of Vera Dare, a photographer whose shot of Mary Coin, a Native American migrant laborer and the single mother of seven children, is her greatest legacy. It also contains clues that help Walker Dodge, a present-day history professor, understand his own family. “I chose Mary Coin because I recognized something in Florence Thompson’s face. Those two children squeezed into the frame accentuate her acute responsibility for their lives,” says Silver, 52, who is the mother of two boys.

This marks Silver’s third novel set in California; each explores the lives of hard-working people, especially single mothers. But Silver—whose rich, engaging style and unique blend of fact and fiction have inspired comparisons to Joan Didion, Nathanael West, and Raymond Chandler—didn’t set out to be a California writer. “I react to landscape the way I react to people,” she says. “Certain landscapes suggest emotion and action—inseparable from the people who live there.”

ALSO:
Read “What Would You Pack for the End of Days?” Marisa Silver’s April 2010 feature about the Apocalypse and one L.A. couple who prepared for it