Home Celebrity From Carole Baskin to Leslie Jordan, the Unlikely Stars of the Quarantine 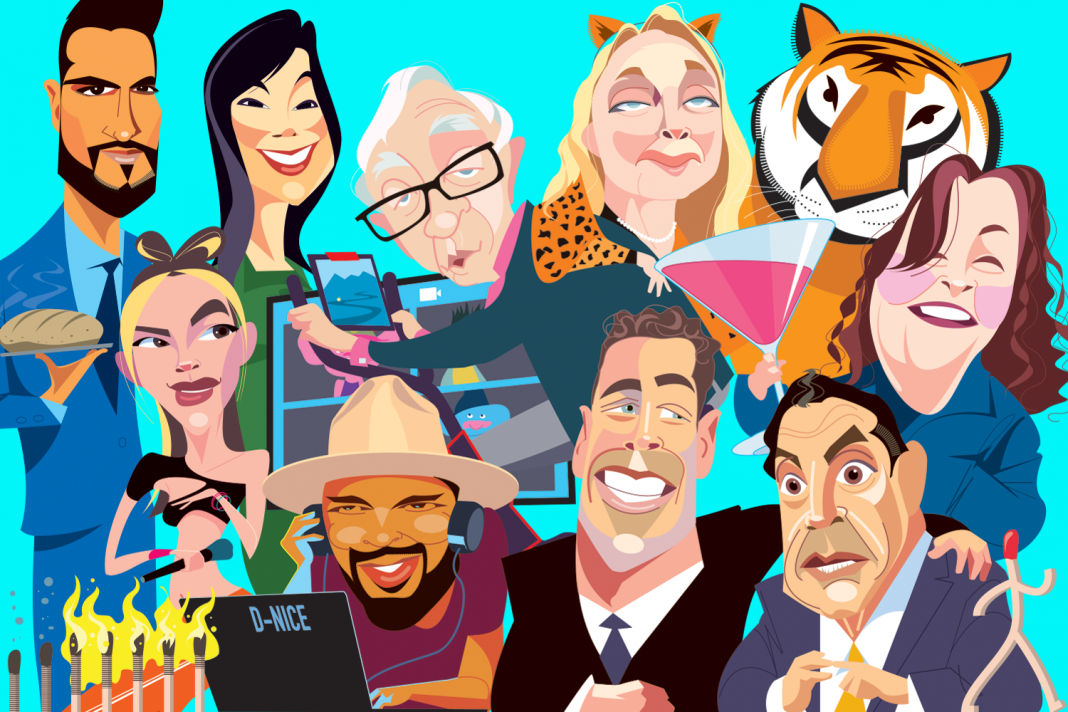 It’s hard to think of the COVID-19 pandemic and its impact as anything other than a series of downturns: in global health, the economy, our cultural lifeblood, and moods. But as in any crisis, there are positives deserving praise. Dr. Anthony Fauci, unknown to many of us months ago, now has his own bobblehead—and deservedly so. But other experts and personalities—some with direct ties to the novel coronavirus, others who are delightful distractions—have captured our collective imagination. Here are 20.

Netflix’s zeitgeist-defining docuseries Tiger King is teeming with wilder-than-the-last characters, but one rises above the rest. Baskin—the 58-year-old former big-cat breeder turned conservationist and archrival/attempted murder victim of central subject Joe Exotic—sports an enviable feline-inspired wardrobe; coos her memed-around-the-world tagline, “Hey all you cool cats and kittens”; and prefers not to answer questions about her mysteriously missing ex-husband. A morally ambiguous figure for our uncertain times, she’s also sure to be one of Halloween’s most popular costumes—so stock up now on the fiercest tiger prints you can find.

The British singer, 24, didn’t want to release her second album, Future Nostalgia, into a pandemic—she announced its arrival with tears on social media. But its neo-disco bangers are exactly what a lockdown dance party demands, and the release is her first Top 10 LP in the U.S. She’s liberated the masses to move while (fabulously) self-quarantining with her model-celebrity-spawn boyfriend Anwar Hadid. But how hard is that?

Heffington, 46, had already been motivating Angelenos to hone their hip shaking  at his Silver Lake dance studio, the Sweat Spot, but the Grammy-nominated choreographer has turned his Joshua Tree house into a makeshift gym space. For his five-day-a-week Sweatfest cardio class on Instagram Live, he coaches around 8,000 viewers at a time through unique moves. Fans are known to end sessions with a cathartic cry.

Born Derrick Jones,  D-Nice had a moment as a hip-hop  artist in the ’90s that  quickly faded. But  the 49-year-old DJ  reached newfound fame streaming his live Club Quarantine sets from his downtown L.A. apartment, drawing hundreds of thousands of stay-at-home revelers, including Rihanna, Oprah Winfrey, Bernie Sanders, Joe Biden, and Michelle Obama. The funk-and-soul-heavy playlists are more than a sonic escape—they’re an act of communal transcendence against all odds.

A previously undersung L.A. comedian and internet provocateur, Fox, 29, racked up more than 300,000 views with a stone-faced parody—which made perfect use of Three 6 Mafia’s “Slob on My Knob”—of Gal Gadot’s viral-for-all-the-wrong-reasons “Imagine” sing-along.

The local artist couple, based in View Park-Windsor Hills, illuminated the power of social distancing with their “Safety Match” viral video, in which animated matches light up in a row until one of them steps out of the way. Viewed roughly a million times, the contemporary art piece achieved what no government PSA could.

The New York Times cooking writer (and native Angeleno), 34, had already achieved food-world stardom with two best-selling books before lockdown. Under quarantine, Roman’s simple yet flavor-packed recipes for dishes like caramelized shallot pasta—and her unfussy-but-particular Brooklyn boho banter—have become required reading and eating. Roman went from darling to pariah in May when controversial comments she made about Chrissy Teigen and Marie Kondo went viral. If only shallots made you immune to Twitter backlash.

More than 3 million people on Instagram watched the tranquil Barefoot Contessa, 72, demonstrate how she keeps her “favorite tradition,” the cocktail hour, alive under desperate conditions. The Food Network star has been a rightfully beloved figure for nearly two decades, but her mixing a gigantic cosmo was a hilariously refreshing reminder of what a true treasure she is.

You’re not good, we never loved you, and yet without gallons of overpriced filtered alkaline H2O, we’re suddenly overjoyed to guzzle you.

After hoarders cleared out the toilet paper aisles, the makers of bidet products began cleaning up with their water-jet-shooting self-cleaning devices. The brand Brondell saw a 300 percent spike in sales, while the cleverly marketed Tushy sold out entirely. The future may be wipe free.

The video-conferencing platform—which has raised security concerns and provides the same service as FaceTime, Google Hangouts, and Facebook Messenger—has become a key part of life under quarantine. Zoom stock has jumped more than 100 percent since January.

New York Governor Andrew Cuomo, 62, has been lionized for leading his state through the darkness. But his cute younger brother, 49-year-old CNN anchor Chris, stole plenty of shine when he  tested positive for  COVID-19 and  without missing a  beat continued hosting  his show in self-isolation from his basement. Despite regular potshots from  right-wing critics, the younger Cuomo managed to come off  as more sincere and urgent than ever. One NYC matchmaker says the duo are topping her “most wanted” list, beating out even the Jonas brothers.

Podcast Reply All delivered a blockbuster with a mind-bending search for a song—which might not exist—that a man says got stuck in his head in the ’90s. A reflection of the unanswered questions inundating our lives, except with far lower stakes, the March episode has sparked a 35 percent increase in the show’s listenership.

Universal’s Trolls sequel, with a bizarre rock-versus-pop premise and a message about cultural appropriation that will likely go over the heads of its intended audience (and perhaps that of star Justin Timberlake), set a record for the biggest debut for a digital release, topping every relevant platform during its opening weekend in April. The $20 two-day rental price seemed steep to some, but to parents with stir-crazy kids it was a bargain.

With Tinder hookups on hold, we’re turning inward—and reaching for sex toys. This cheekily marketed device has seen  a 152 percent year-over-year rise in U.S. sales thanks to quarantine orders. Its resonant new slogan for those hungry for pleasure: Stay home.

It’s a cliche at  this point, but  making it ourselves is truly com forting, if not always Tartine level. No wonder more than 100,000 posts have been tagged with #crumbshot on Instagram.

The new class of badass reporters

Journalism is never more important than during a national emergency or the mass dissemination of misinformation. We happen to be living through both. A young crop of reporters in the White House briefing room—including Weijia Jiang of CBS, Kaitlan Collins and Jeremy Diamond of CNN, Yamiche Alcindor of PBS, and Kristin Fisher of Fox News—has resisted President Trump’s theatrical boasting and mugging, pressing for straightforward information and fact-checking on the spot.

The 64-year-old veteran actor from Will  & Grace and American Horror Story has amassed more than 3 million Instagram followers since March as a result of absurdist check-in videos in which he appears to be either very bored or very stoned. Pointing to his DIY painted toenails, he shares: “I messed this one up.” Relatable.

My Year of Rest  and Relaxation

Ottessa Moshfegh’s  2018 best-selling novel, about a beautiful, lazy, pill-popping  young woman who attempts a yearlong  hibernation in a Manhattan apartment, had  been celebrated at the time of its publication for its dark humor. Now its wit is hailed as beautifully horrific, as evidenced by the literary critics who are circling back to it. Vice declared of the book in one recent headline: “Blacking Out in a Juicy Couture Tracksuit Is a Lockdown Mood.”

Already a cult obsession, Peloton’s $2,245 souped-up stationary bike has never been more covetable as gyms lie dormant. The company’s stock bounced 50 percent in March, leaving an offensive Christmas-ad debacle in the dust. Cheaper competitors are also racing ahead. Echelon, whose bikes start at $839, reported a tenfold increase in sales the same month.