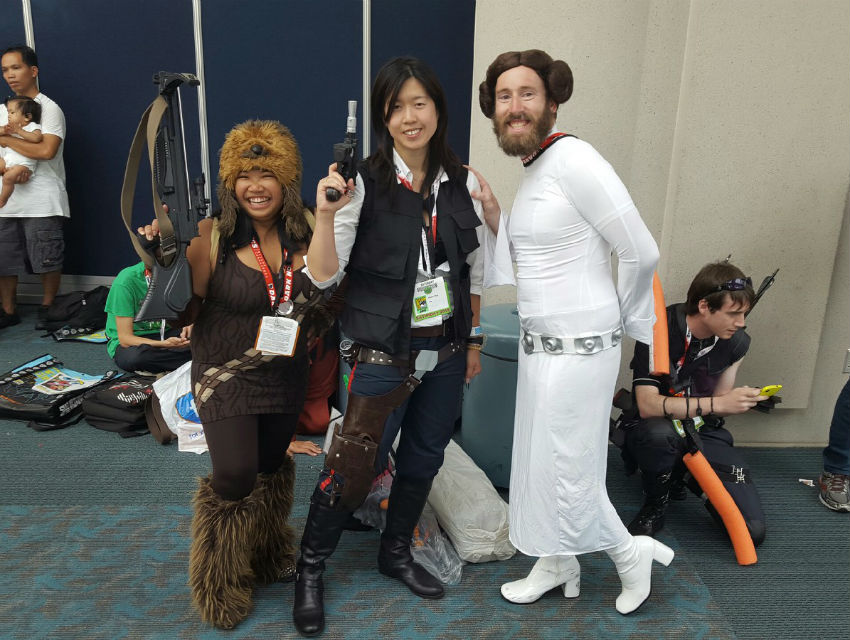 Checking out trailers for upcoming superhero blockbusters, standing in line for meet-and-greets with your favorite Star Trek cast members, geeking out on the latest comic books…these are all staples of the San Diego Comic Con experience. In recent years, however, the cosplay scene has become one of the Con’s unofficial main attractions, and gender bending (dressing up as a character who is of the opposite gender and a way of challenging gender and pop culture norms), is not an uncommon sight.

We asked three friends who had come down from San Francisco to attend the Con, Allison Chan, Pamela Page, and Andrew Page—a.k.a Hana Solo, Miss Chewie, and Prince Leia—about life as a gender bending cosplayer.

Why did you decide to gender bend the characters from Star Wars?
Hana Solo: At first I wanted to cosplay a female character, but I really like Han Solo’s swagger, and he’s iconic enough of a character to gender bend. Also, I did it for the blaster.

Miss Chewie: Andrew [Prince Leia] and I found a cute Ewok outfit for our dog Batman, and we loved it so much that we all dressed up as Ewoks for Halloween. This is our first year at Comic Con. When Allison told us she wanted to do Hana Solo, we decided to gender swap as well.

Prince Leia: I wanted to cosplay a strong female character, and really, Princess Leia was the first one that came to mind.

What has the experience been like?
Hana Solo: It’s been kind of overwhelming. We’ve been stopped so many times for pictures I can’t even keep count. We feel like mini-celebrities. But our main attraction is Prince Leia. It’s not everyday you see that character with a beard.

Miss Chewie: It’s been crazy. I thought we’d get a couple of requests for photos, but people were literally lining up and throwing their kids at us. Everyone wanted a picture of the bearded Leia. Andrew was definitely the star.

Prince Leia: We’re already talking about doing it again next year. Maybe we’ll do a gender bend version of Firefly.