Home Uncategorized Staged By The Belle 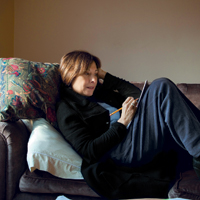 Beth Henley is known for her tales of the South, but she calls L.A. home

It took Beth Henley five years to write her eerie new play, The Jacksonian, “not to mention my whole life,” she says. “It was a long haul.” The play, which runs February 7 through March 18 at the Geffen Playhouse, revolves around a mysterious murder and is set in Henley’s hometown of Jackson, Mississippi. But the 59-year-old prize-winning playwright wrote it here in Los Angeles, where she has lived since 1976. The first reading was in her Westwood living room, with her friends Amy Madigan and Ed Harris voicing the roles they now bring to the stage. Madigan and Harris are married, as are their characters in the play, but that didn’t occur to Henley when they were cast. “I didn’t think, ‘Oh, they’re married.’ I was thinking, ‘Oh, they’re brilliant.’ ”

The same has been said of Henley, whose first produced play, Crimes of the Heart, won a Pulitzer in 1981 and was turned into a well-received film whose adapted screenplay (also by Henley) nabbed an Oscar nomination. As with her next four plays, Crimes was set in the South. She’s tried other settings—Wyoming, California—but The Jacksonian is the result, she says, of “winding my way back.”

Henley, who is also a professor at Loyola Marymount University and an actress, appreciates the simple things about life here: the winter light, the outdoor spaces. She writes first drafts in pencil because “you can do it anywhere—at a coffee shop, in your car, on the couch, under your covers.” So why not reside where theater is king? “I love New York, but every time I go there I have so much fun, I get nothing done,” she says. “At eight o’clock in New York there are plays all over town, and that’s so beautiful because there’s such a sense of community. But opening a play in New York is always terrifying because it’s so cut-and-dried. Such a blood sport. Here I’m capable of working.”