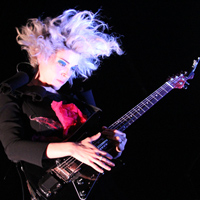 Aided by few props or special effects, Clark skittered about the stage like an oddly graceful windup toy. She delivered blistering guitar solos that sometimes sounded like a cassette player eating the tape. She even prepared her stage banter ahead of time to tell the audience stories about themselves: “You were born north of the equator, and your family doesn’t know everything about you.” True, and true.

“Once when you were a kid, you built a fire with a magnifying glass,” Clark said. “You waited nine hours for it to finally burn, but when it did, you felt like a magician. But you stomped it out because you forgot you’re afraid of fire.”

Not true, but Clark’s calm delivery felt so familiar it was almost believable.

Clark is fierce, her music even sinister at times, but those interludes are just one part of a childlike pureness throughout her performance. It rings so true the audience can’t help but be drawn into the dreamy, celestial world she creates.

Thanks to clever strobe lighting — used so extensively that the venue posted a seizure warning out front — every moment of Clark’s set felt like a frame-worthy snapshot. Bizarre and frenetic yet measured and elegant, like Clark herself.

St. Vincent will play the Wiltern March 21, 8 p.m. Catch her in a guest role on IFC’s Portlandia tonight at 10/9 Central.