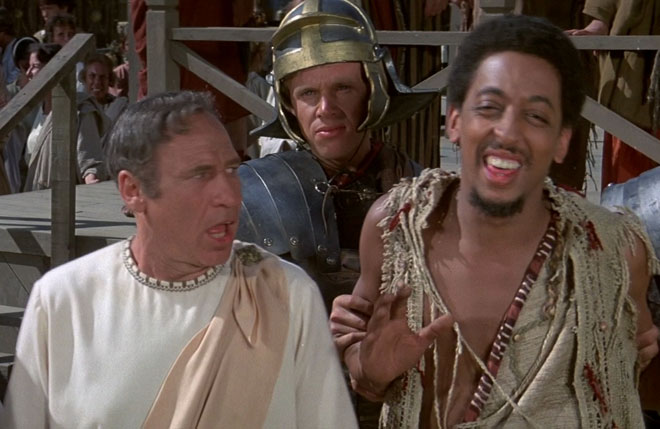 Mel Brooks in "History of the World: Part 1"

A comedian, writer, director, and raconteur, Mel Brooks is the consummate shtickmeister, always ready with a quip or anecdote. It’s not until an hour and seven minutes into Robert Trachtenberg’s American Masters documentary Mel Brooks: Make A Noise, when Brooks is asked “When did you first become aware of Hitler?” that he stops making comedy to truly reflect. “What a crazy question… what a really crazy…” says the man who penned the song “Springtime for Hitler.” It’s the first—and only time—we see Brooks without a comeback.

A more grown-up version of VH1’s Behind The Music, American Masters has been the bastion of artist biography on television for almost three decades. By now even its subjects are clued in to the predictability and the pitfalls of the series format. From the moment the cameras roll Brooks is completely “on,” emerging from a speeding car, clapping his hands together in here-we-go eagerness, and singing into the camera: “Won’t you be kind/And please looove/Mel—vin Brooooooks!” He talks about his career and life with candor but also the protective restraint of a class cut-up and a Borscht Belt tummler. There’s fun, intelligence, irreverence, and no shortage of shrewdness about the actual business of making movies. Still, it’s a pleasure to see Brooks stopped in his tracks, even for a moment. “I was aware that he was not a nice person,” says Brooks of Hitler. And we’re off again.

When the stage debut of a Brooklyn boy named Melvin Kaminsky went awry after a glass shattered on stage, he went downstage, removed his character’s wig and beard, and told the audience: “I’m only fifteen. I never did this before.” It was at that moment that Mel Brooks was born. Pauline Kael once called Brooks’s gift “the surreal freedom of his kibitzer’s imagination.” In a clip in which he talked about his time writing for Sid Caesar’s Your Show of Shows, Brooks put it more succinctly, calling himself an “arrogant, obnoxious shithead.”

We follow his collaborations with Carl Reiner on the enduring character of The 2000 Year Old Man (“All of his jokes are great structures of rhythm,” says Reiner) and with Buck Henry on Get Smart (who credits Brooks with the character name Maxwell Smart). For those who grew up watching and reciting lines from Brooks’s movies in the ’70s and ’80s and recall only the laughs, Make A Noise reminds us of the profound commercial risks Brooks took in his parodies—shooting Young Frankenstein in black and white as an homage to James Whale’s Frankenstein or going to great pains to make Silent Movie (almost entirely) a silent. It’s fascinating to learn Brooks sought out the subjects of these spoofs to see what they thought. Alfred Hitchcock was impressed by Brooks’s riff on the Psycho shower sequence in High Anxiety even if Brooks was off on the number of shower rings; George Lucas asked only that there be no Spaceballs action figures.

Unfortunately, there is nothing about The Critic, the 1963 Academy Award-winning animated short where Brooks added his bewildered old man’s musings over avant-garde cartoons, an unsung precursor to Mystery Science Theatre 3000 and a whole school of “commentary” comedy. (There is a brief discussion of it on the American Masters website and among the DVD outtakes.) Brooks’s Oscar acceptance speech for his Producers screenplay is the kind of speech no one dares gives any more—short, funny, and truly “from the heart.”

We also learn about Brooks as a behind-the-scenes discoverer and nurturer of talent. Madeline Kahn and Tracy Ullman extol Brooks’s ability to understand female comedians. Creating Brooksfilms, he supported the making of many non-comedic movies including his wife Anne Bancroft’s Fatso, and, in a most unexpected yet intriguing partnership, David Lynch’s The Elephant Man. The finest single encomium in Make A Noise comes from Gene Wilder who, when asked whether meeting Mel Brooks was a watershed moment, flashes a beatific smile. “When God spoke to Moses the first time, if you ask him, ‘Was that significant in your life?'” says Wilder, laughing. “I would say it had some minor importance, yes.”