Home Uncategorized Spring Forward with 20 Things to Do in L.A. This Weekend: Reptiles,... 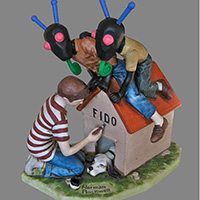 Sunday is going to be a big day; remember to set your clocks forward an hour so you won’t be late for any important events.

SEE: Wes Andershow
Wes Anderson’s singular worlds—from the undersea environs of The Life Aquatic with Steve Zissou to the über-twee cool of Moonrise Kingdom—have inspired paintings and pop songs. Imitate the filmmaker’s style at this tribute by staging your own scene in the photo booth. More information (March 8; Nerdmelt)

RUN: L.A. Marathon
The city’s largest producer of endorphins begins at Dodger Stadium and ends in Santa Monica. Nonparticipants can catch a glimpse of runners crossing the finish line at the intersection of Ocean and California Avenues. More information (March 9; all over)

HEAR: Boogaloo Assassins & Nick Waterhouse
If you miss the days of Fania Records, the famed New York salsa label that thrived in the late ’70s and early ’80s, then the Boogaloo Assassins are your band. With its mashup of boogaloo and Afro Caribbean jazz rhythms, the nine-piece outfit knows how to make a room come alive. This show includes a set by 27-year-old garage rock and R&B enthusiast Nick Waterhouse. More information (March 7, Hollywood Legion Hall)

SEE: Little Shop of Horrors
Friday night at midnight is the perfect time to see this 1986 movie starring Rick Moranis as a nebbishy florist terrorized by a blood-hungry plant named Audrey II. The cinematic adaptation of this goofy musical was directed by the brilliant Frank Oz. More information (March 7; Cinefamily)

HEAR: Los Angeles Review of Books
Larb is a delicious Thai dish; LARB is the Los Angeles Review of Books. The latter will be hosting a reading featuring authors whose work was published in LARB’s most recently print quarterly: Geoff Nicholson, Dinah Lenney, Alice bolin, and Victoria Dailey. Come at 5:3 p.m. for drinks; the reading starts at 6:15 p.m. More information (March 9; The Mandrake)

SEE: A Million and One Pieces
Artist David Tracy seeks to prove that fluidity can be achieved with the tiny building blocks known as LEGOS, the primary medium for his sculptures. The exhibition utilizes tens of thousands of LEGO bricks to create pieces of furniture and a human head. More information (March 8 – May 26; Forest Lawn Museum)

HEAR: First Fridays at NHM
The Natural History Museum is host to a discussion about killer newts and scaly salamanders followed by sets by San Fermin, Son Lux, and Wild Up!. More information (March 7; NHM)

EXPERIENCE: Festival of Colors
Also known as Holi, the Hindu spring celebration culminates with a battle royal in which adherents douse one another with colored powder. If that sounds too messy, there’s also music and dancing. More information (March 8; Excelsior High School)

LEARN: The Rise, Decline, and Rise of Food Preservation
The Culinary Historians of Southern California host chef Ernest Miller as he seeks to educate the public about food preservation. This talk will outline the history and future of society’s fascination with the practice. More information (March 8; Mark Taper Auditorium)

SEE: Savion Glover’s STePz
From jazz phrasing to improvisation, celebrate tap dance with the master of the genre and his ensemble of dancers. More information (March 7; Valley Performing Arts Center)

HEAR: Annabelle Gurwitch
The writer-actress reads from her memoir, I See You Made an Effort, and chats with fellow thespians Amy Brenneman, Frances Fisher, and Laraine Newman about hitting the big 5-0. More information (March 7; Barnes & Noble/The Grove)