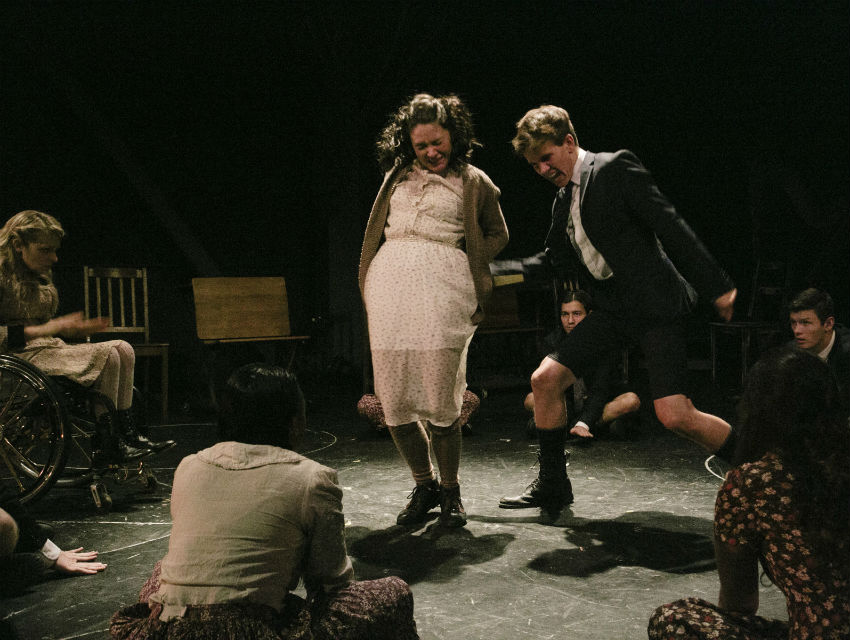 “I was in New York doing The Hunchback of Notre Dame and it was my night off,” he says. “I went to see a play and got word from the actor who played Hanschen that he’d been offered this film. I told him I was thrilled for him. It’s a hard thing to replace anyone in this show. Everyone has to have seven special skills. They have to play three instruments, know sign language. I was texting with Andy about it.”

Andy is Arden’s fiancé Andy Mientus (TV’s Smash and the first national tour of Spring Awakening). Mientus says Arden was texting in a deep panic. “Andy said, ‘well, I’ll do it.’ It hadn’t occurred to me. I didn’t have to think about it. I just calmed down and said ‘would you really? You don’t want to work with me.’” Indeed he did and Spring Awakening begins previews tonight with the official opening next week.

Arden received glowing reviews for his direction of the show that played the Rosenthal Theatre last fall. Mientus has performed the role of Hanschen 600 times on tour. How did the two work together with different previous experiences on the show? “I was excited about coming at it with a brand new director all these years later with all I know now,” says Mientus. “I’m a few years older than I was back then. It’s been a great exercise in taking my time and telling the story and getting up to speed because I have to think about the sign language.”

With Deaf West Theatre productions, the show is both sung and signed. Which means Arden had to depart from the original production’s idea of the cast all holding microphones. “The original production was sort of a comment and statement and concert,” he says. “We went from scene to concert which was exciting. In this production it seems more like a ballet and an opera. American Sign Language (ASL) is such a style, but I think we’re attempting to make it all seem within the world of the play as opposed to the concert version.”

Getting the show ready to open means the couple has spent a lot of time together. “I think one of our biggest issues our fear of the perception of what was going to happen,” says Mientus. “What the cast was going to do, thinking they couldn’t complain to me or that I’d be the eyes of the production. People are smarter than that. It’s really been easy.”

Arden offers a different perspective. “We spend all our time together so I’d say the challenge is we don’t get much time away from work together. I thought it was going to be a little strenuous or difficult. I want what’s best for the play and also what’s best for our relationship. When Andy is on stage I don’t think of him as my husband-to-be and I think that’s a testament to his talent and his work commitment. I wouldn’t have hired him had he not been the best person for the job.”

Mientus also says “I think we are both very used to getting past each other’s bullshit for lack of a better word. We are together. We’ve been friends for about a decade. We don’t have to hide behind something, the way you do with people you don’t know as well.”

So when is the big day? “In the fall of 2016,” Arden reveals. “Because of the venue we have to wait. We can wait. We get to be married forever, but we only get to be engaged for a short amount of time.”