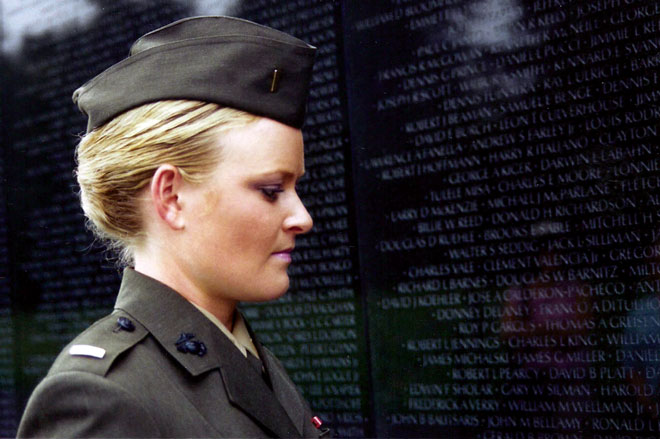 Kirby Dick might laugh off the “activist filmmaker” label, but he doesn’t shirk the social responsibility that comes with directing a documentary like The Invisible War, a wrenching examination of rape in the military.

“There’s a real fine tradition there,” the Oscar-nominated director says of muckrakers, a category he’s been lumped into since the film’s release in 2012. “Particularly in today’s society where so many things are covered up, we need more of them.”

Sitting in a Silver Lake coffee shop, Dick is relaxed, unfazed by the Academy Awards less than two weeks away. Invisible War is a strong contender for Best Documentary, which might earn him the trophy he missed out on with Twist of Faith, his 2004 doc about sexual misconduct within the Catholic Church.

Over the past three decades, the subjects of Dick’s documentaries have run the gamut: an S&M performance artist (Sick: The Life & Death of Bob Flanagan, Supermasochist), the MPAA rating system (This Film Is Not Yet Rated), closeted politicians (Emmy-nominated Outrage), and a French deconstructionist extraordinaire (Derrida). It was Twist of Faith, on which he interviewed sexual abuse victims, that, he says, prepared him to some degree for The Invisible War.

Tapping social media, victim advocates, and journalists who had covered the underreported issue, Dick and his producing partner Amy Ziering reached out to some 150 women at the beginning of their search. They interviewed 70 before focusing on a handful of evocative stories with common themes of demoralization and injustice.

Kori Cioca, a former U.S. Coast Guard seaman and young mom, is still battling the Department of Veterans Affairs for medical coverage to fix her jaw, which was destroyed when her commanding officer raped her five years earlier. Ariana Klay of the U.S. Marine Corps was told she invited the sexual assault that left her suicidal by wearing her uniform’s regulation-length skirt. Elle Helmer, a second lieutenant in the Marines, found that her rape kit was “lost” during a brief, inconclusive investigation by NCIS.

The subjects put a face on startling numbers: In 2011, military officials received just under 3,200 reports of sexual assault. According to the Department of Defense, about 1,500 of those resulted in referrals for possible disciplinary action and just 191 of the attackers were convicted at courts-martial.

“What sticks out the most is the repetition,” Dick says. “We did interviews over an 18-month period and the last interview was in many ways the same story. The hundredth interview, the same story. You just couldn’t believe it — and no justice.”

Lanky, with sleepy eyes behind sharp glasses and an easy smile, Dick seems to naturally put people at ease. He says he and his crew took great efforts to help their subjects feel comfortable. Ziering conducted most of the interviews, creating a safe space for the victims who had not only suffered through physical trauma but also the betrayal of military institutions they’d long respected. Some of them came from military families, Dick says, and received an icy reception when they turned to those closest to them for help.

As the film flows from one-on-one interviews to footage of the victims in Washington, D.C. — seven of the women filed a lawsuit against military leadership alleging negligence and failure to comply with congressional mandates related to rape — one voice is noticeably absent: that of their assailants.

“We didn’t want the audience to be distracted by these four or five perpetrators and maybe our pursuit of them,” Dick explains. “We wanted to focus on the system and on the individuals who could change the system: the president, the secretary of defense and members of the Joint Chiefs of Staff.”

Their scrutiny has already started to bring change. Two days after seeing the film, Secretary of Defense Leon Panetta effectively stripped unit commanders of the decision to prosecute in cases of rape.

“I was really surprised it happened so soon,” Dick says. “Even before the film came out, we were having discussions about this with people in the Pentagon, and they were saying they’re absolutely holding the line on this, this is not gonna budge.”

On viewing the documentary, one could argue the filmmakers were too easy on those officials sho have the power to address the problem. Dick and Ziering include interviews with the next tier of antagonists, former director of the Sexual Assault Prevention and Response Office Dr. Kaye Whitley and her replacement, Air Force Maj. Gen. Mary Kay Hertog. (Hertog stepped down in June to be replaced by Army Maj. Gen Gary Patton, whom she has said will be aggressive in carrying out new policies.)

Whitley’s interviews are especially frustrating. She offers little in the way of real answers, relying on military jargon and a stated unfamiliarity with several points Dick presses. But the filmmaker says his aim was never to rake Whitley or her colleagues over the coals.

“Actually the tone of the interviews was pretty friendly. I think they were very shocked that we didn’t just take their answers at face value and we pushed. These are generals in the military,” Dick says. “They deserve respect to begin with, just from their position, and if you act like you don’t respect them, then the film will be discredited” on assumptions of bias against the military.

Dick’s own father served in the U.S. Navy during World War II, but the director says he came to the film with little understanding of the deep bonds enlisted men and women develop with the military.

“That’s been one of the real positive experiences, understanding the positive experiences that people do have in the military,” he says. “There’s a real division in this country between people who love and respect the military, and people who criticize it or just ignore it and want nothing to do with it. I actually think that’s harmful for this country.”

Though a few of the victims say they want nothing more to do with the military — Kori tries to talk a waitress out of signing up; another woman gazes at a display uniform and says, “Thank God I never have to wear that again,” — several still to feel a deep connection to this part of their lives.

Although reconciling their pain with their love of country continues to plague these men and women, Dick says he noticed some sense of validation, of relief, during the interview process. “You see this weight kind of being lifted from them question by question,” he says. “I think to have filmmakers come to them and say, ‘We believe you, we want you to be a part of this thing’… they’d been trying to be believed for years.”

Panetta’s announcement is only the first step. Significant policy changes — and true closure for victims of military rape — will take time.

“It’s never enough,” Dick says. “They’re called survivors because they’ll be surviving the assault for the rest of their life.”

The film offers a few proposals for what should come next, chief among them shifting rape case investigations into the civilian criminal justice system. “If it’s in the chain of command, people don’t report,” Dick says. “They’re not only concerned with talking to their unit commanders and not being believed, they’re actually equally concerned that someone way up the chain of command — God, to them, completely God — might be aware of them. In many ways they just want to be anonymous.”

Dick says he doesn’t know whether Panetta’s nominated replacement, former Nebraska Senator Chuck Hagel, will be aggressive enough to follow through on reform. If nothing else, the director says he hopes The Invisible War will continue to stoke discourse and maybe bridge a gap in understanding.

“This is our military and these are our citizens,” Dick says. “We all need to take responsibility for it, whether we agree with what’s happening or not. It shouldn’t just be a feminist issue. It’s a human rights issue.”