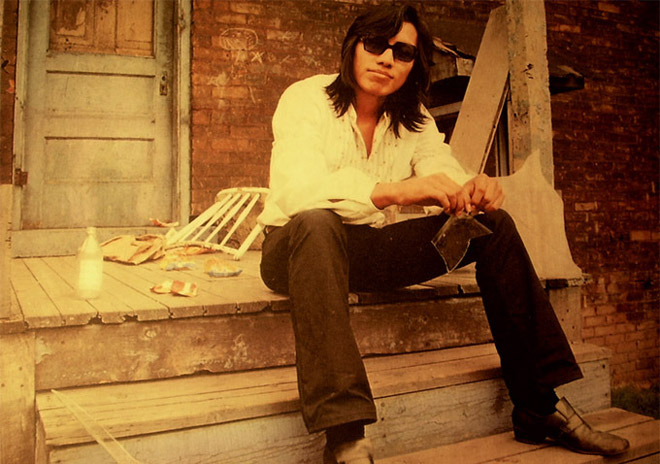 In the late 1960’s, a second-generation Mexican day laborer named Sixto Díaz Rodriguez, who was busking around the anonymous taverns and dives of Detroit’s bombed-out Wharfs Riverside district, was discovered by record company talent scouts. He released two non-selling albums, Cold Fact (1970) and Coming From Reality (1971), before he was dropped by his label and, ostensibly, dropped off the face of the earth. Rumors of his demise were ugly: He set himself on fire. He died in prison. He OD’d on drugs. He blew his brains out onstage.

They were also wholly inaccurate.

As Malik Bendjelloul‘s quiet, startling documentary Searching for Sugar Man reveals, Rodriguez is alive and well and living in the same small house in downtown Detroit that he’s lived in for 40 years. He still mows lawns, knocks down sheds, and dabbles as a carpenter and construction worker. If he plays any music, he does it alone in a modest room heated by a wood-burning stove. Until 1998, he had remained completely unaware that half a planet away in South Africa, his two forgotten albums had made him, in the words of one giddy admirer, “bigger than Elvis.”

There are many lucky coincidences and convergences in Searching for Sugar Man, which was nominated for Best Documentary Feature for this year’s Academy Awards. Set aside the Sherlock Holmes detective story that shapes the film and the project wouldn’t have worked if Rodriguez’s music had not withstood the test of time. His lyrics — elliptical, metaphoric, removed, oblique — unmoored the songs from any time capsule. It was this quality that allowed Rodriguez’s songs to float halfway across the earth and settle in bootleg form in the old vinyl shops in Cape Town, where they were memorized rallying cries for a generation of young, mostly white South Africans who were beginning to question the inequalities of apartheid. One of the pivotal players in Rodriguez’s unlikely “comeback” — a record-shop owner named Stephen Segerman, dubbed “Sugar” by his compatriots — testifies that the songs told him and his friends, “It was okay to be angry at your society.”

One of the rare gaps of Bendjelloul’s film is that it doesn’t directly addresses why the radicalized generations who responded to Rodriguez’s Aquarian-age protests seemed to be mostly white. (It invites this query in shots of adoring crowds at Rodriguez’s triumphant March 1998 “comeback” concert in Cape Town, which show virtually no black faces.) But when the film showcases the music itself, often with intricate animation, it truly comes alive. Everybody involved in this music at the outset — the producers, the engineers, the musicians, the artist himself — did everything right. We feel their confusion and heartbreak when the first album sells only six copies in the United States.

Steve Rowland, who produced the second album, Coming From Reality, plays the quietly devastating “Cause” and notes that Rodriguez’s opening line, “I lost my job two week before Christmas” wound up actually happening when A&M Records dropped him just before the holidays. “Nobody was even invested in listening to this,” the baffled Rowland says before practically breaking into tears at the rawness of the music. “How can that be?”

Surrounding the heartbroken and the jubilant alike is Rodriguez himself. He’s a little frailer, a little more bent, and still dressed in black like some lost evolutionary link between Johnny Cash and José Feliciano. Despite his “resurrection” Rodriguez maintains a monkish life of willful poverty that the filmmakers depict as almost Christlike. He cannot — or will not — reflect on his situation. “I don’t know if it would have been better,” he says after a question about how things might have been if he had been more famous. “But it’s certainly a thought.” The film alludes to something beyond this question, something that Sixto Rodriguez, in all his reticence, deferential dry humor, and gnostic asceticism may know but won’t divulge. It was, after all, his hard-earned path.