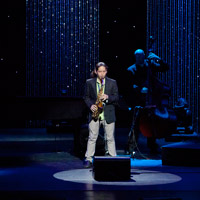 Looking for some inspiration? You’ll find plenty of it among the talented group of high school students who took part in this year’s Music Center Spotlight Awards. The 23rdannual event recognized achievements in dance, music, voice, photography, and art, with an evening of exceptional performances on the Dorothy Chandler Pavilion stage. This year more than 2,300 students participated in the program—the most ever, said Music Center Chairman John B. Emerson—representing 400 high schools from Santa Barbara to San Diego. After months of auditions and master classes, in which the students received professional training and detailed feedback, the field was narrowed to sixteen finalists. These lucky few then got to show off their stuff.

At a time when arts education programs face budget cuts and kids are sucked into the worlds of Facebook and Twitter, this moment was a reminder that pursuing a creative interest and being dedicated to one’s craft offers huge rewards (scholarship money, of course, but also tremendous personal satisfaction). In one video testimonial, played before each performer took the stage, a student said, “Without art in my life I would be lost.” Other finalists, seemingly far older than their 15 to 18 years, spoke eloquently about admiring famous performers at an early age, being encouraged by their families and teachers to pursue their dreams, and working endless hours after school to get the steps, the notes, the strokes just right. (About now you might be thinking, “So what am I complaining about?”)

Actor Ron Perlman served as the evening’s MC. The short sets the finalists performed were poised and polished, as good as anything generally seen and heard inside this hall. And the professional judges had star wattage (among them, Grammy nominees Monica Mancini and David Benoit). Funny how, as the winners were announced, the students became shy, a bit self-conscious, nervous, shoulders slumped. Without an instrument in hand or belting out a tune or leaping across the stage, they showed their youth—which was endearing. The winners: Max Sheldon, 18, for nonclassical voice; Hannah McDermott, 17, for classical voice; Stephanie Wolfe, 18, for nonclassical dance; Sam Zaldivar, 15, for ballet; Jasper Dutz, 16, for jazz instrumental; Stefani Feldman, 17, for classical instrumental; Tara Violet Niami, 17, for photography; and Christina K. Yang, 15, for two-dimensional art.

They’re now part of a tradition that has launched performing arts careers; Spotlight alums have gone on to the Metropolitan Opera, American Ballet Theatre, and the New York Philharmonic. Congratulations to all of this year’s finalists! (And you at home: No more excuses. Try something creative.)