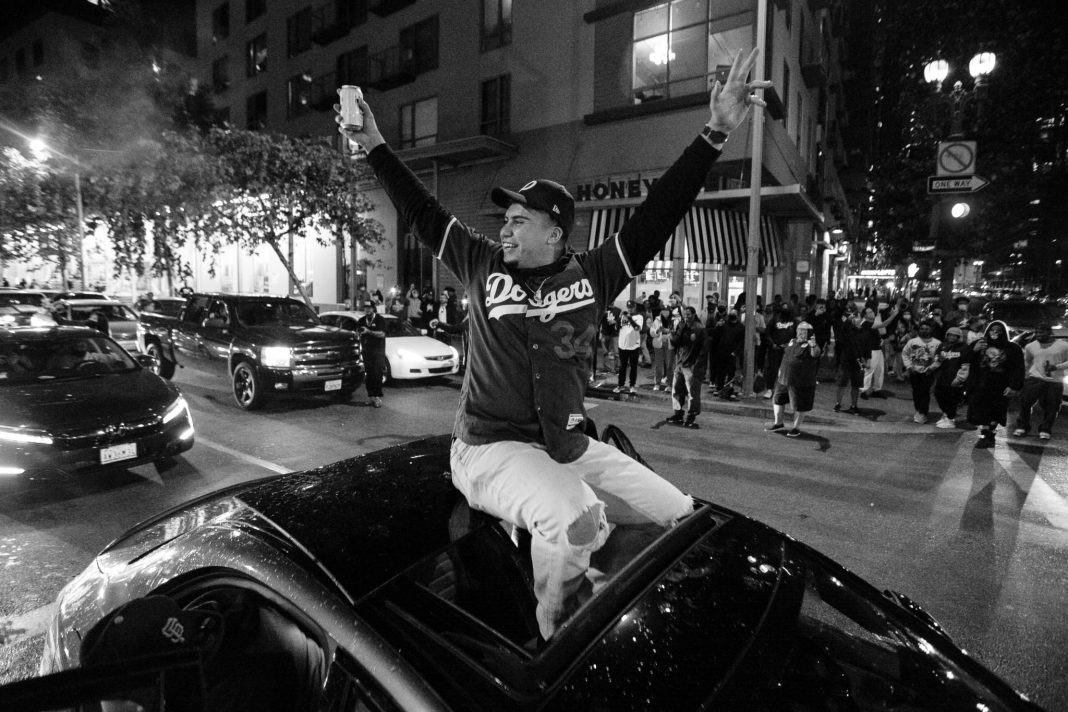 It’s hard to remember just how brightly the spotlight shined on the Los Angeles sports universe in early 2020. A trio of local teams had acquired game-changing superstars. The most significant local sports venue in decades was on the path to opening. Expectations for multiple franchises were sky high.

What could go wrong?

Just as COVID-19 upended L.A.’s business, culinary, and entertainment landscapes, it ravaged the sports scenes. Yet that was far from the only story, and during the year the city and its fans would experience the old cliché of the thrill of the victory and the agony of defeat.

Here is what went down before the buzzer sounded.

Loss of a Legend

Shock and disbelief spread across Los Angeles on the morning of Sunday, January 26, when news broke that the helicopter carrying Kobe Bryant, his 13-year-old daughter Gianna, and seven other people had gone down in cloudy weather in Calabasas. In the following days the region experienced a collective outpouring of grief and struggled to grasp the death of the Lakers legend, who was just 41. Kobe’s life and career were celebrated, analyzed and re-analyzed as the city reflected on how he arrived here in 1996 as a brash rookie and retired after 20 fierce seasons and five Laker championships. That seemed to be just the start, as the Black Mamba’s second act included business ventures and even winning an Oscar. The February 24 memorial at the Staples Center was emotional from the first word, and when his widow Vanessa Bryant spoke, no eye remained dry.

On March 11, a Utah Jazz player tested positive for the coronavirus, and NBA games were immediately halted. The following day the NHL suspended hockey, and all of a sudden the Lakers, Clippers, Kings, and Ducks entered a period of purgatory. COVID-19 also tripped up the March start of the baseball season, delayed the debut of the Sparks’ campaign, and soccer’s LAFC and Galaxy were kicked off the field. Pro sports would resume, mostly without fans, in late summer, but in the initial months of the virus, Angelenos locked in their homes didn’t even have the distraction of watching their favorite team.

When games finally resumed, California would not allow fans in the house. It was weird—picture the cardboard cut-outs in Dodger Stadium—but the strangest sight of all might have been at Rams and Chargers games. That’s because, in September, the $5 billion SoFi Stadium opened in Inglewood, and the only way people could experience the state-of-the-art, 70,000-seat complex was from the comfort of the couch. Rams owner Stan Kroenke’s building is impressive, with its clear sightlines, massive scoreboard and myriad bells and whistles. Games are happening, but cheering comes via recorded, piped-in crowd noise. Then again, the empty stands might be a good thing for the disappointing Chargers, who otherwise would be showered with boos.

On March 10, the Clippers had won seven of their last eight games. The team was peaking as new additions Kawhi Leonard and Paul George were healthy and integrated with the rest of coach Doc Rivers’s squad. Although the virus halted play for months, when games resumed in a bubble in Orlando, expectations were higher than ever for the long-frustrated franchise. But with a 3-1 series lead over Denver in the second round of the playoffs, the Clips pulled what may be the chokiest choke job in NBA history. George was awful, and stellar sub Montrezl Harrell was worse as the team coughed up double-digit leads in three straight games. Shortly after the season ended, owner Steve Ballmer and Rivers parted ways, and the team let Harrell walk (he joined the rival Lakers). Expectations remain high with the new season in its early days, but for Clipper fans, the pain remains.

LeBron James’s first season with the Lakers was an injury-addled disappointment. Then disgruntled New Orleans Pelicans star Anthony Davis forced a trade to the Lakers. The purple and gold instantly sported the best one-two combo in the NBA, and new coach Frank Vogel emphasized defense and put together smart schemes that played to the strengths of the stars and their supporting cast. The Lakers were steamrolling opponents in the early months of 2020, and though the start of play in the Orlando bubble was meh at best, when the post-season began, LeBron and Davis were unstoppable. The all-L.A. playoff spectacular was canceled due to the Clippers collapse, but the Lakers dispatched Denver. A talented Miami Heat pushed the Lakers in the Finals, but on October 11 the team closed out the series in six games, winning the first championship since 2010. Despite the coronavirus, fans flocked to the streets to celebrate.

The Dodgers’ 2020 regular season was a virus-shortened 60 games, not a traditional 162. Still, a lineup featuring Mookie Betts, 2019 National League MVP Cody Bellinger, and Justin Turner pounded opposing pitchers, and the Blue rolled to the league’s best record. They stomped through the first two rounds of the playoffs, then rallied from a 3-1 series deficit for an epic defeat of the Atlanta Braves. The World Series may have been in a bubble in Texas, but fans in L.A. cheered as Clayton Kershaw cast off his run of post-season pitching disappointment, and shortstop Corey Seager clubbed his way to a series MVP trophy. On October 27, Julio Urias recorded a seven-out save, and the team finished off the Tampa Bay Rays in six games. It was the Dodgers first World Series title since 1988, and while there would be no parade, on that night, fireworks sounded across the region.

Turner was pulled from the deciding game of the World Series after the seventh inning. Viewers didn’t know it at the time, but he had tested positive for the coronavirus and gone into isolation in the stadium. Yet after the Dodgers clinched the title, the crimson-topped player returned to the field to celebrate with his teammates. Turner, a Dodger since 2014, even removed his mask for a group photo in which he sat between the World Series trophy and manager Dave Roberts, a cancer survivor. Turner would later apologize, but the moment has descended into infamy. The scar on the celebration was the perfect symbol of how, in 2020, the coronavirus impacted everything.