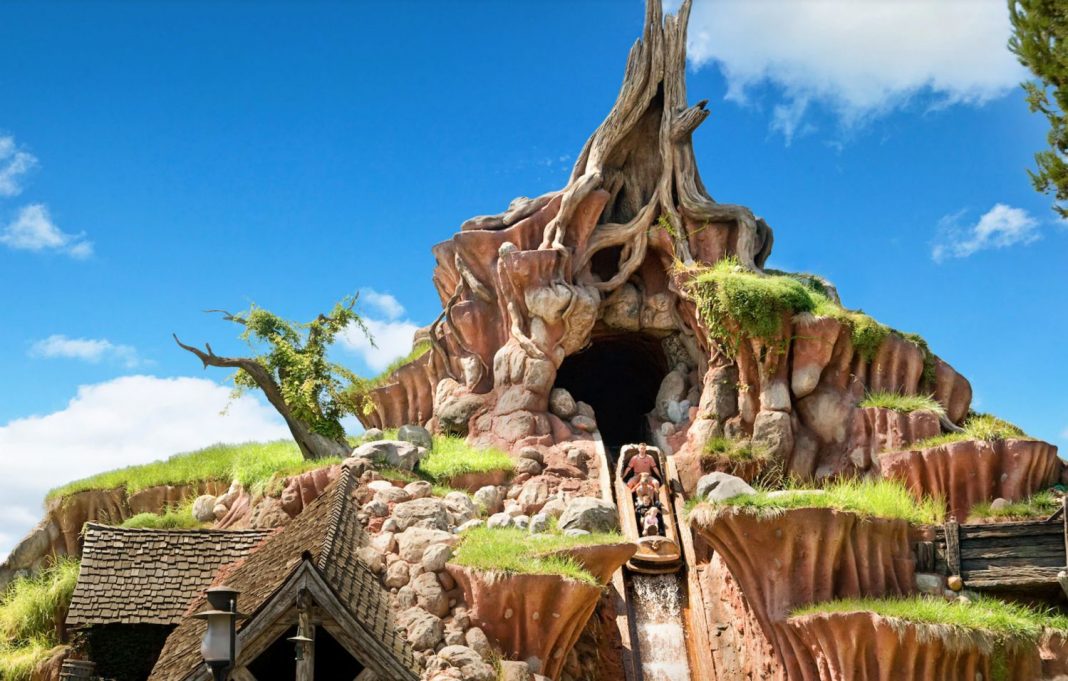 Update: June 25, 2020 — The Walt Disney Company has announced plans to remodel the Splash Mountain attraction at Disneyland and Walt Disney World. The reimagined ride would replace scenes from the 1946 film The Song of the South with characters from the 2009 film The Princess and the Frog. Sometime soon, riders will see Princess Tiana, Louis the Alligator, and Dr. Facilier instead of Br’er Rabbit and Br’er Bear before their floating log falls down the flume.

More than 20,000 fans signed a Change.org petition calling for the re-theming, but the company says they have been working on the new attraction since last year and that it will pick up where the film left off, with Tiana and Louis preparing for Mardi Gras, a great connection to the park’s New Orleans Square.

“I think this is great news,” actor Michael-Leon Wooley, who voiced the animated alligator in the film told USA Today. “Or as Louis would say, HALLELUJAH!!”

June 11, 2020 — Disneyland flume ride Splash Mountain was a hit from the day it opened in 1989. All summer, crowds encircle the 87-foot-high peak for hours waiting their turn to freefall through the bramble and get soaked on the way down. Before you get to the splash, you spend nine-and-a-half minutes floating by the characters from Disney’s 1946 musical Song of the South. Most kids today have no idea where the characters come from since the movie has been out of circulation for decades and has never had a U.S. home video or streaming release.

The film was picketed by black activists during its initial release and has always remained a sore spot for the company. In 2006, Disney chairman Bob Iger called the film “fairly offensive” and it was left off the streaming service Disney+ when it launched last year. Now, activists are calling for references to the movie to be scrubbed from the theme park attraction. “While the ride is considered a beloved classic,” a petition on Change.org says. “It’s history and storyline are steeped in extremely problematic and stereotypical racist tropes.” Thousands have agreed with the petition’s idea to retheme the ride to another film set in the American South, The Princess and the Frog.

Where did Splash Mountain come from? Back in the 1980s Disney Imagineer Tony Baxter had a problem. Only 2 percent of Disneyland visitors made their way to Bear Country, a forgotten backwoods way out in the northwest corner of the park that was home to the Country Bear Jamboree and a sleepy barbecue restaurant. He dreamed up an attraction that could utilize nearly 100 animatronic animals recycled from the shuttered America Sings attraction and a flume ride system like the Timber Mountain Log Ride that he remembered from Knott’s Berry Farm. He tied them together with the Oscar-award winning tune “Zip-a-Dee-Doo-Dah” and animatronic figures of Br’er Rabbit and Br’er Fox.

Not everyone agrees that the stories should disappear. Actress Whoopi Goldberg has called for the movie to be made available. “I’m trying to find a way to get people to start having conversations about bringing Song of the South back,” she said at the D23 convention in 2017. “So we can talk about what it was and where it came from and why it came out.”