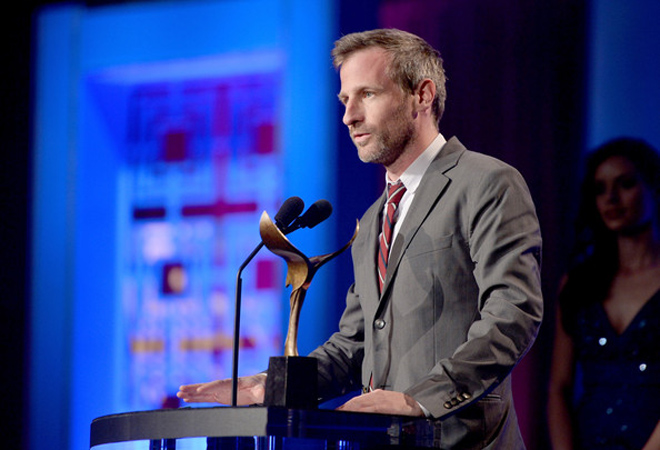 It’s been a great year for Spike Jonze. Not only did he win an Oscar and a Golden Globe for best original screenplay, he also won the coveted Best Original Screenplay at the Writers Guild of America awards for his futuristic romance Her. The WGA awards are for writers, by writers. To be recognized by your fellow screenwriters and then by the Academy is a double-honor.

Jonze, a skateboarding aficionado who began his career making music videos for Beastie Boys and Weezer, once worked on the Jackass TV show (which was also nominated for an Oscar for the makeup and hairstyling in Bad Grandpa). So it was something of a surprise when it was announced in 2009 that he would be co-writing the screen adaptation of Maurice Sendak’s much loved children’s book Where the Wild Things Are. That movie earned some nominations but received few wins; Nevertheless, Jonze wasn’t fazed. He started writing his first original full-length screenplay, and this year, he raked in trophies for it during awards season.

The Writers Guild’s other major award, Best Adapted Screenplay, went to Billy Ray for Captain Phillips. That wasn’t a surprise since Ray also penned the screenplay for The Hunger Games. At Beyond Words, the panel discussion for screenwriters who were nominated for WGA awards, Ray spoke of his writing with a deep understanding of the technical process as well as the creative one. It’s safe to say we’ll probably see his name attached to some big films in the next few years.

The Academy differed from the SGA on this one and gave Best Adapted Screenplay to 12 Years a Slave. Fun fact: John Ridley, who co-wrote 12 Years a Slave, also wrote the screenplay for Three Kings, a movie that was directed by David O. Russell (who was nominated for an Oscar for Best Director this year) and showcased Spike Jonze in a small acting role. And the wheels of Hollywood to continue to turn…

Where Do We File Flawed Classics Like ‘Gone with the Wind’?

12 Years A Slave Screenwriter John Ridley Will Direct His Own Film About the L.A. Riots