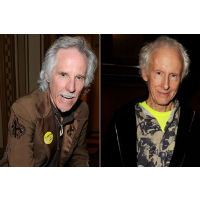 On the eve of Jim Morrison’s birthday, the last remaining members of The Doors, guitarist Robbie Krieger and drummer John Densmore, will be on hand for a screening tomorrow night of Mr. Mojo Risin’: The Story of L.A. Woman followed by a joint Q&A. The 2012 documentary chronicles the recording of the band’s sixth album. Not only a classic of the era it’s a thoroughly L.A.-centric work that produced the hits “Riders On the Storm,” “L.A. Woman,” and “Love Her Madly.” It was also Jim Morrison’s last recording; he died three months after the album debuted.

Mr. Mojo Risin’ features a bevvy of music industry notables including critic David Fricke, KLOS deejay Jim Ladd, engineer Bruce Botnick, the band’s former manager Bill Siddons, and the late Doors keyboard Ray Manzarek (whose birthday happens to be December 8). The film, which is peppered with anecdotes from band members, live performance footage, and rare clips of the Doors, paints a picture of an iconic band at the height of their powers.