Home Uncategorized These Are the Most Spectacular Vistas for Viewing the L.A. Skyline 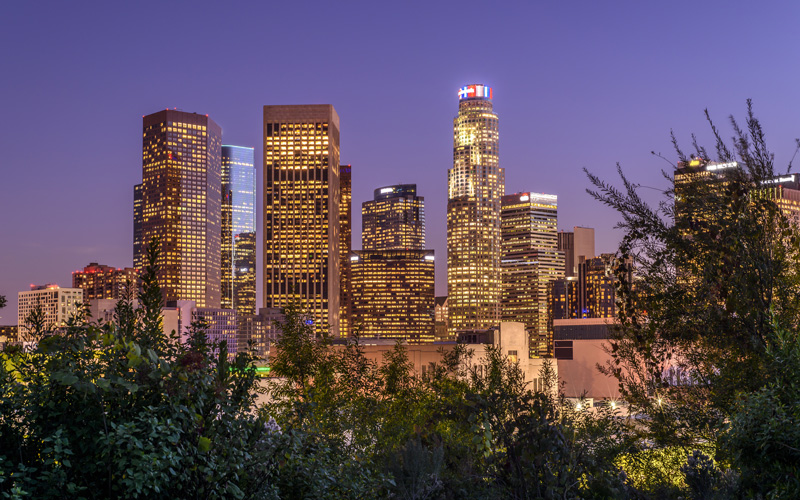 What’s the point of living in a larger-than-average city if you don’t occasionally spend a meditative evening watching as the buildings of downtown are backlit by the sunset? Skyscrapers are basically giant sculptures that light up at night (and also happen to be filled with thousands of office people making conference calls and filing reports and forgetting their Dropbox passwords and doing other office things). For a breath of serenity sometime, take an hour to meander up to a high place where these architectural marvels are best admired.

On the north edge of downtown, Vista Hermosa feels like a secret oasis in the middle of the city except not really secret, judging by the number of Instagram pics geotagged there. There’s a tiny lot with free parking (the best possible pairing of words) and an winding path that loops through fragrant native foliage. The bench at the top of the hill provides sublime views of the skyline.

A photo posted by LA Explorers Club (@losangelesexplorersclub) on Nov 8, 2016 at 5:38pm PST

Type “Ascot Hills” into Google Maps and it’ll take you straight to the dirt lot that marks the entrance to Ascot Hills in El Sereno on the Eastside. A handful of paths of varying steepnesses lead up through golden dried grass to sweeping views of downtown.

The mysterious, glowing cross looms over the 101 freeway, and the view of the skyline from its base is spectacular at night. Park on Cahuenga Terrace just off Cahuenga, and climb the steep trail up the hill. It’s a slippery trek, and the likelihood of falling into a cactus is a solid 34 percent according to reputable statisticians that we definitely consulted. Those same statisticians also set the likelihood of it being totally worth it at 97 percent, so the odds are in your favor.

Yep, Eric Garcetti’s own home is open to the public, for free, on weekdays between 8 a.m. and 5 p.m. Enter on Main Street, walk through the metal detector and get your visitor sticker from the security guard. Then, make your unchaperoned way up to the 26th floor, where there’s a good shot you’ll have the place to yourself. The northwest side of the observation deck provides an excellent view of L.A.’s modest cluster of skyscrapers as well the newly-completed courthouse (that shiny, Ruffles-textured cube in the foreground).

On top of the parking structure for the work-in-progress ROW DTLA development in the Arts District, there’s an unexpected garden with walking paths and greenery. And, yeah, because it’s on this list, it also has a killer view of downtown.

Top of the Park gift shop at Dodger Stadium

You don’t need a ticket to a Dodgers game to get into this gift shop (because access to slightly overpriced sports paraphernalia is a constitutional right), so if you come through the Elysian Park entrance off of Sunset any day between 10 a.m. and 5 p.m. (and whenever there’s a game happening) an attendant will show you the way. Located on the top deck of the stadium, the gift shop boasts incredible vistas of downtown.

Echo Park Lake is Los Angeles at its most idyllic. It’s also the only place where you can enjoy the downtown skyline while sitting in a boat.