Home Art Inside Lucy Sparrow’s L.A. “Supermarket,” Everything Is Made of Felt

If you’ve never been bowled over by a bottle of Windex or stood in awe before a shelf of Pam cooking spray, brace yourself. In felt form, even run-of-the-mill products become objects of wonder.

British artist Lucy Sparrow makes her West Coast debut this week with a nearly 2,800-square-foot supermarket in which everything is made completely of the crafting fabric beloved by kindergarten teachers and camp counselors. The installation, which is staged inside the Standard, Downtown L.A. and runs August 1 to 31, is fully shoppable. Browse 31,000 plush pieces, including jars of Vlassic Pickles, cans of Chef Boyardee, and boxes of Nerds and Red Hots, then make your way to checkout, where even the conveyor belt is cast in fuzzy fabric. “From the fridges to the shelves—absolutely everything is made of felt,” says Sparrow.

In addition to groceries, Sparrow Mart will have a meat counter, a sushi bar (where shoppers can place individual pieces of sushi into a box and grab chopsticks, wasabi and soy sauce—all made of felt, of course), plus a 1980s video rental section with cloth copies of Short Circuit and Dirty Dancing, among other throwback titles.

Though Sparrow did research in a number of modern-day American grocery stores, her L.A. installation is meant to channel a fictional supermarket in the 1980s. “Sparrow Mart represents the first age of the hypermarket, where everything was available and plentiful and almost in hypercolor,” she says.

As for whether or not Angelenos are ready for a full-fledged British felt invasion, Sparrow laughs. “This city has crazy stuff happen all the time,” she says. “If anyone’s ready for a felt supermarket, it’s definitely L.A.” 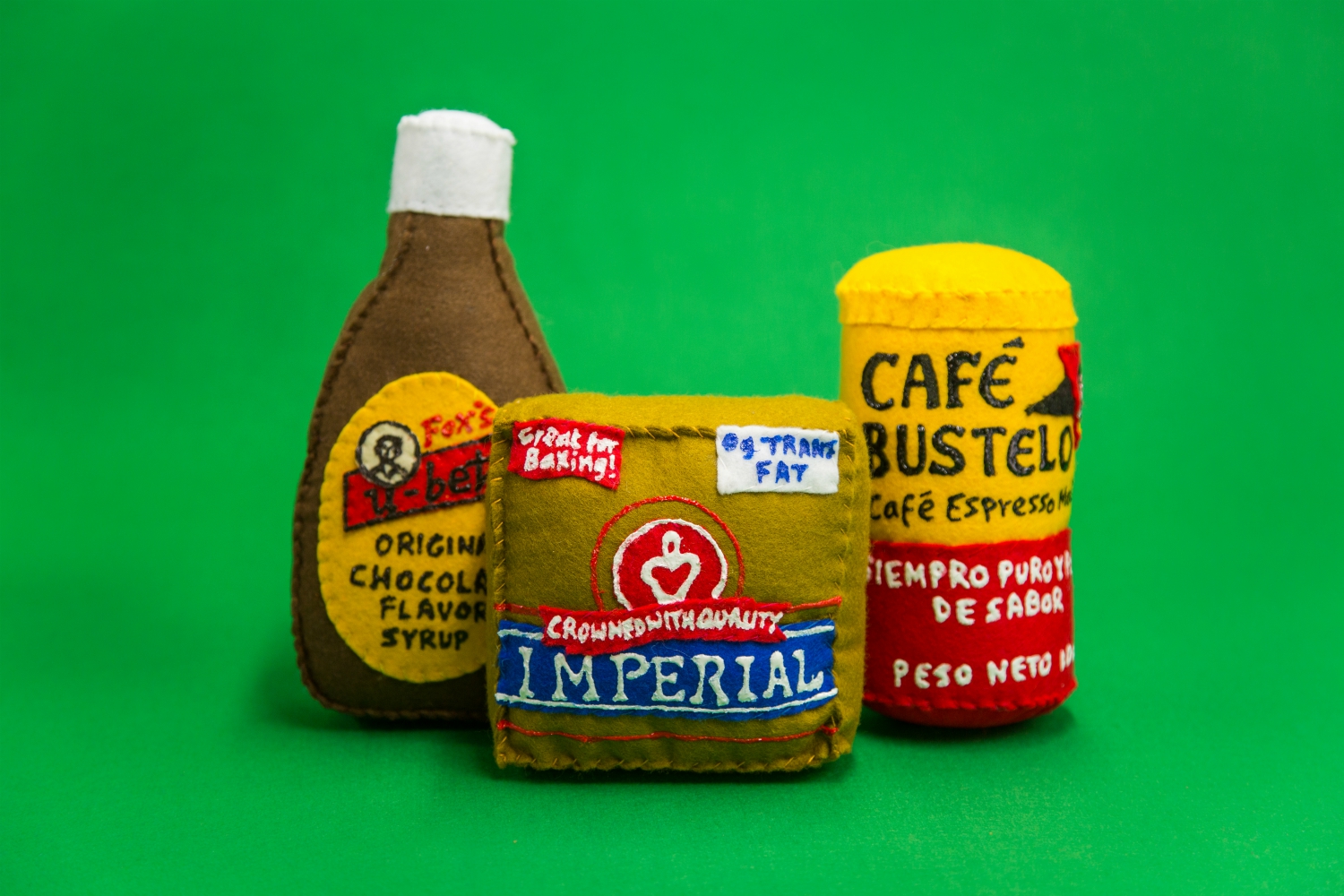 Sparrow’s first foray into fabric-focused retail took place in 2014, when she crafted a corner shop in London stocked with felt editions of The Guardian and Daily Mail, plus huggable boxes of tampons and Imodium tablets. The following year, Sparrow made a bold statement with Warmongery, an installation featuring felt weapons (guns, knives, explosives…even a fabric tank), followed by a felt sex shop hawking condoms, lube, porn, and penis pumps—all in material form. Moving her art stateside, last summer Sparrow set up shop at the Standard, High Line in New York with her project 8 ‘Till Late—a felt bodega filled with 9,000 fuzzy products.

The new L.A. installation is four times larger than the “fauxdega” in NYC and promises to be the artist’s most ambitious project yet. Right after the NYC show closed, Sparrow began work on the 31,000 items, and work continued for approximately a year. She made the pieces in her studio in England and then shipped them over to L.A. She’s been here for the last three weeks making final preparations and working from a studio in Laguna Beach.

Besides being larger, the West Coast shop will have more “stage presence,” as Sparrow puts it. “8 ‘Till Late was a mom-and-pop shop, but everything here is done to the max. This one’s a bit more sexed up; there’s more makeup involved and the workers will be wearing hot pants.” Sparrow herself will be on hand every day of the installation, gliding past her cloth creations on roller skates. “I’m the only one stupid enough to do this on skates,” she jokes.

Pricing at this souped-up supermarket starts at $5 for a bubblegum—not a huge price to pay for an original piece by an artist who has been commissioned by the BBC and shown at international galleries and fairs, including Art Basel.

“For me, it’s hugely important that art is affordable and accessible,” says Sparrow. “There’s no elitism here; I’m not going to exclude anyone. After all, this is a supermarket…whether you’re rich or poor, you’ve shopped in a supermarket.”

Sparrow Mart is open August 1 to 31, from 11 a.m. to 9 p.m. Tuesday through Sunday (closed Mondays) at the Standard, Downtown L.A. Admission is free of charge.

RELATED: Another Yayoi Kusama Installation Has Arrived in L.A. and You Can See It for Free