Home Art A Spanish Muralist Captures the Layers of L.A. Through the Faces of... 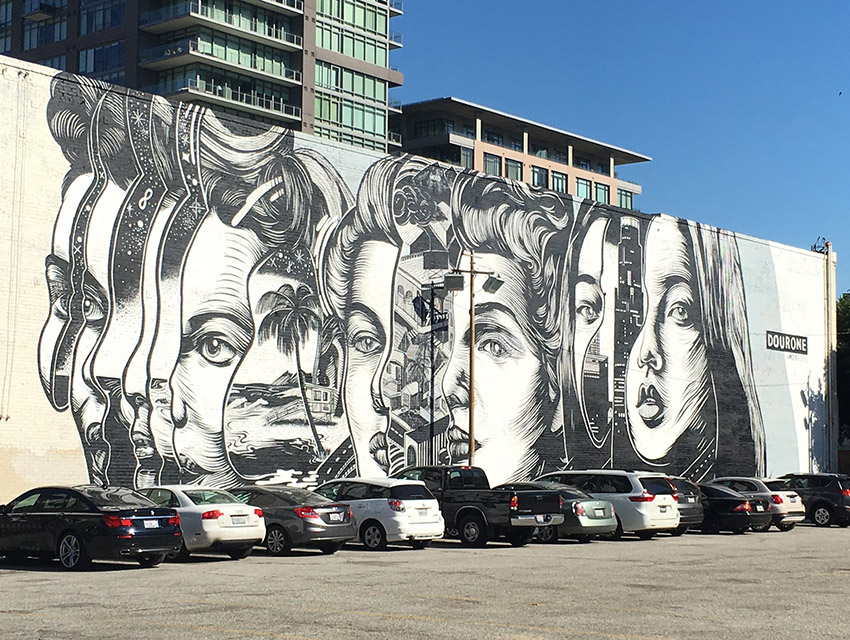 Downtown Los Angeles is experiencing a revitalization that is changing the very landscape of the city. It will only be a matter of time before the Expo line makes it possible to travel from downtown to the beach, significantly (or so we hope) reducing the traffic that delineates city lines. Madrid-based artist Dourone has imagined just such a landscape with a mural at Hope and 12th Street, one which portrays our city as three beautiful women who have roots in its ocean, its hills, and its thoroughfares.

Dourone specializes in intricate black and white murals and graphics. He subscribes to the sentipensante movement, a mashup of the Spanish words for “feeling” (sentar) and “thinking” (pensar). This style of literature and art is traced back to the great Uruguyan writer, Eduardo Galeano, who explored the idea of “feel-thinking” in his work The Book of Embraces. For Dourone, sentipensante manifests itself in his murals: he paints his emotions, never harboring any insecurity despite the vastness of the wall. He paints with confidence despite being a visitor in this town.

Do Art Foundation is responsible for bringing Dourone to this wall, and the result is traffic-stopping. He paints the city as he sees it, with all of its various layers and intricacies. Palm trees and architectural treasures big and small weave their way through the portraiture. A road wraps its way through the women of Los Angeles, reminding us that we are all connected, despite the vastness of the space. The lofts peeking out above the mural are a symbol of the ever-changing movement of this city.

This Gorgeous Mural in South L.A. Might Be Painted Over, and We’re Freaking Out a Little

Do Art Foundation Makes Their Mark at Runway Playa Vista