Home Film This Maligned 2006 Movie About Dystopian L.A. Is Too Real at This... 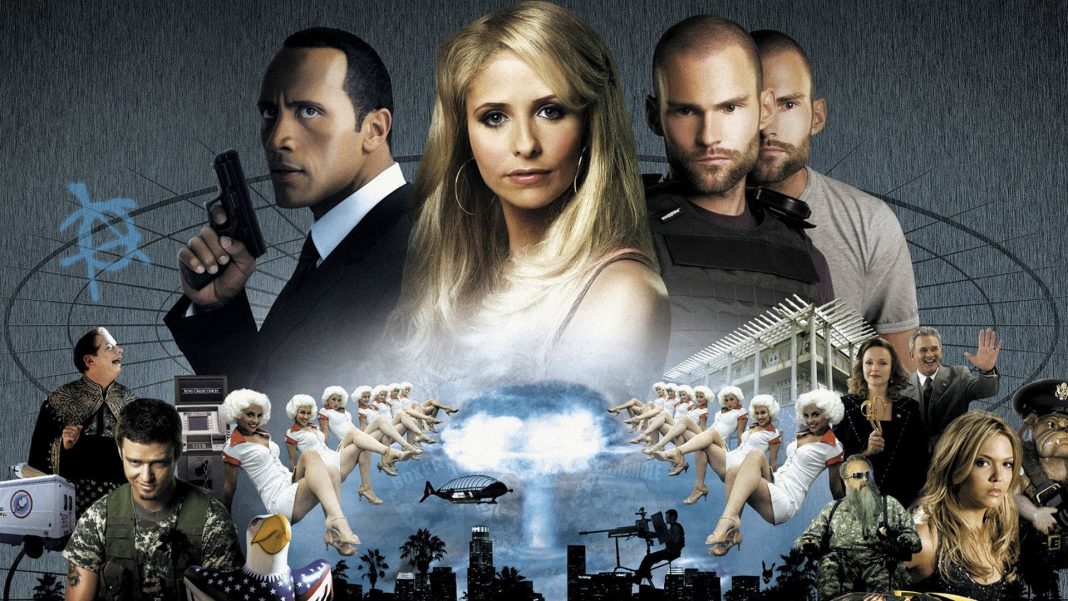 Richard Kelly’s Southland Tales—the writer-director’s 2006 follow-up to cult hit Donnie Darko—is a messy ode to L.A. It’s also one of the best satirical stories that’s ever been set in the City of Angels, right up there with with Who Framed Roger Rabbit, The Long Goodbye, and Clueless in the SoCal cinematic pantheon of stories about how we imagine L.A. and why it’s a city that’s uniquely absurd to its root.

Unlike all the others in this canon, Southland Tales was neither a commercial nor a critical darling out of the gate. Quite the opposite. But looking back on it from the hellworld of surveillance, toxic politics, and entertainment news in which we currently live—and which Southland Tales so deftly predicted and realized—it’s time to reevaluate a film that’s been all but forgotten.

The casting itself is fascinating. Among the ‘90s names who appear in the film are Dwayne “the Rock” Johnson, Seann William Scott, Sarah Michelle Gellar, Mandy Moore, Justin Timberlake, and a slew of Saturday Night Live and MADtv alumni: Amy Poehler, Nora Dunn, Will Sasso, Cheri Oteri, Jon Lovitz, Janeane Garofalo, and others. And then there are the ‘80s throwbacks, like John Larroquette, Curtis Armstrong (Booger from Revenge of the Nerds), and Christopher Lambert. Kelly defended his unusual casting choices by arguing that these actors are way more versatile than they get credit for (which is true). The director had a lot of cachet after Donnie Darko became a hit, and it would appear that he was in a place where he could do what he wanted, at least within reason.

“I still don’t know what that movie was about,” Justin Timberlake said years after the release of the film, which the actor/recent press piñata undertook during his edgy/indiecore experimental years. The resulting synthesis of TRL-era faces with dystopian, Bush-era surveillance and authoritarianism couldn’t have predicted a more accurate vision of the future.

In 2018, we live in Southland Tales. We live in a world controlled by goofy but powerful cartoon shysters whose lust for power is only surpassed by their love of destruction for destruction’s sake. The real world is just as fragmented and unnerving as the narrative flow of Southland Tales, but I’d argue the film has a happier ending than what we likely have in store. It’s Mulholland Drive for kids who were doing blow and listening to blog house. It’s Buckaroo Banzai for anyone who survived the ‘00s. It’s Dr. Strangelove for the Monster Energy generation. It paints an unflattering yet romantic version of Venice, the South Bay, and even the Staples Center, which was one of the more recognizable structures in downtown at the time. But at its core, it’s a movie about capitalism and imperialism bringing about the end of the world. Kelly foresees the rise of libertarian tech vampires like Peter Thiel and jellyfish like Elon Musk, the bipartisan worship of the military state, and a new wave neo-Marxists who emerge and problematically wrestle for power.

Unfortunately, most critics scoffed at the movie upon release. It was loudly booed at its premiere at Cannes in 2006 and pretty severely panned by most American critics. It was long and uneven, and Kelly had all sorts of FX shots that were unfinished when the film was being shopped around.

Southland Tales also suffered the misfortune of being released right as the WGA strike was going down, which killed any hopes it had of finding its theatrical footing. And it had three graphic novels worth of backstory, which—even by Kelly’s own standards—was perhaps too much to ask an audience to digest in one sitting. If Southland Tales were conceived of (or rebooted) today, it would probably be some sort of episodic “TV” project, wherein the material could have more time and space to gestate. Kelly has hinted publicly about some sort of new iteration of the unsettling mythos the film and graphic novel series etched out. Whatever it turns out to be, Kelly should be shooting more stuff.