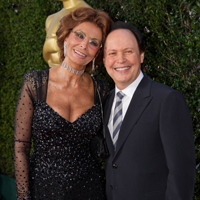 “I got chills, and they are definitely multiplying.” said John Travolta at the Academy of Motion Picture Arts and Sciences Tribute to Sophia Loren. Yeah, it’s a hokey (it’s a line he sang in the flick Grease) but it summed up the stylish (great suits and hats) crowds reaction to the 76-year-old icon. Even Billy Crystal (who Loren personally asked to host the event) pulled a looky-loo as she made her way down the red carpet at the Academy’s Bev Hills location. Crystal seems to be bucking for the Oscar hosting job again, doing a bit onstage with a 10 foot Oscar statue, “No, they haven’t asked me yet,” he joked to the gold fella before conducting a Q&A with Loren at the end of the festivities. Loren was there with her two sons and at least half of the folks that went onstage to pay tribute to the actress broke down crying. The Academy showed clips of her work from her Oscar-winning turn in the 1961 film Two Women to her latest work in Nine. Many of her Italian collaborators were on hand or sent in heartfelt video messages during the evening. The soft spoken actress finally hit the stage after all the hoopla saying, “My heart beats so hard I cannot speak anymore. I have to calm down a little bit.” She broke down speaking about her late husband Carlo Ponti and dedicated the evening to him as well. She ended by saying, “And I hope to see you in another fifty years for the hundredth anniversary.” The way she’s managed to stop time, I believe her.