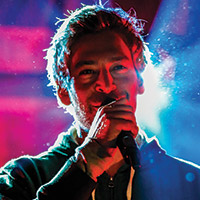 Watching Matisyahu’s transformation over the last decade has been inspiring. He became famous as the beatboxing Hasidic reggae artist. A few years ago he cut his hair, shaved his beard, and moved from Crown Heights to Los Angeles. His spiritual evolution didn’t stop, and it’s at the heart of his fifth album, Akeda (out June 3). His sounds and songwriting influences are still the same—hip-hop, the Old Testament—but now they’re more integrated and experimental. It’s as if he doesn’t have to shout about them anymore because they’re part of who he is. As much as the new songs are steeped in disillusionment and loss, they’re also full of gratitude and hope for the future. Thematically Akeda is more mature, uncompromising, and inward-looking, but sonically it’s still anthemic—and that triumphant feeling is ultimately what resonates.