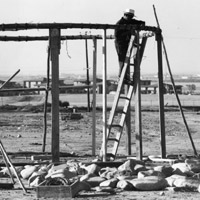 The idea of transporting people from various nations onto a college campus so students can study their habits seems a little crazy in 2012. Not in the 1960s.

Robbie Kett and Anna Kryczka, PhD students at The University of California at Irvine, have created Learning by Doing at the Farm, an exhibition that delves into the history of UCI’s little-studied Social Sciences Farm, an underdeveloped plot of land that became the home of indigenous Mexicans, Guatemalans, and Samoans in 1968. The Farm was conceived as an interactive social sciences experiment in which students were encouraged to learn by doing. “The Farm was to be a site for faculty and students to ‘simulate various native environments’ and in so doing understand the universal principles undergirding the ‘belief and action systems current amongst the peoples of the world,'” Kett and Kryczka explain in an essay they wrote for the exhibition.

For counter-cultural activists, the Farm also became a commune where students, activists, and itinerants lived together in an effort to build an alternative community. These people made their homes anywhere: existing Farm buildings, chicken coops, repurposed school buses.

Kett and Kryczka’s goal for the exhibition is to examine an often overlooked aspect of UCI’s history. “UCI’s 50th anniversary is coming up in a few years, and there’s going to be quite a bit of historical narration of the school,” Kett says. “What we wanted to do in anticipation of that is to document a rather quirky and odd chapter of this history that’s not often interrogated or talked about, and one that probably would not be incorporated in any official narrative of UCI.”

The exhibition, which is held in the Outreach Gallery of the UCI Contemporary arts center, features a variety of photographs from the university’s archives, a miniature model of the Farm, and several other artifacts and information regarding this fascinating part of Orange County’s history. The gallery is open Tuesdays and Thursdays from 3 – 8 p.m. through July 20 and can also be seen by appointment.