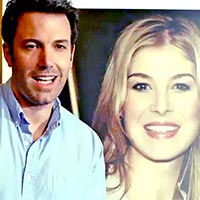 WHAT: The only thing this week more tense than yesterday’s World Cup penalty kick shootout between Argentina and the Netherlands (which incidentally, a grown-up Harry Potter and pals were forgoing in favor of the Quidditch World Cup) is the new Gone Girl trailer, which apparently made the entire country freak out.

VERDICT: Yawn. If you’re among the tiny cohort of Americans who haven’t yet read Gillian Flynn’s bestseller or heard the twist ending from a friend, the film adaptation should have plenty of tension. If you’ve read the book, the film’s primary pleasure will be watching Ben Affleck get pilloried and noting the changes that director David Fincher has made to the story. It’s a win-win but nothing to get that excited about.