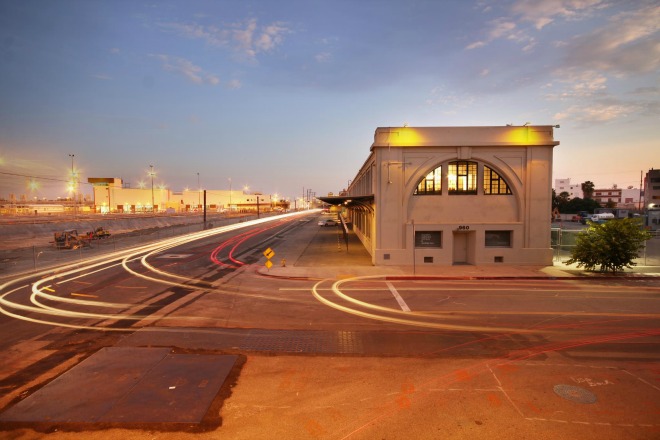 Complete the sentence: You know you’re officially establishment when… You buy your first home? You hit 40? You earn kudos from “the man”?

In SCI-Arc’s case, it’s all three.

Two years after the progressive Southern California Institute of Architecture (SCI-Arc in the vernacular) purchased the narrow, quarter-mile-long strip of building it had been renting for a decade, the city’s anti-establishment design school celebrated its big 4-0. Tickets to Saturday’s dinner gala, with top-flight guests Frank Gehry, Thom Mayne, Ray Kappe, and current director Eric Owen Moss,  went for one thousand dollars a pop.

The anniversary follows news that the 2013 America’s Best Architecture Schools survey from trade publication DesignIntelligence now ranks SCI-Arc the 6th best program for graduate architecture studies in the nation, right behind MIT and a smattering of Ivies. For undergraduate curriculum, it comes it’s the 2nd best, beaten only by Cornell.

That’s all a bit dizzying for an institution founded in 1972 by a renegade group of Cal Poly Pomona faculty and students after a falling out between the school’s dean and then-architecture department chair Ray Kappe. The school opened in a Santa Monica warehouse before settling into its current location at a former railroad depot along Santa Fe Avenue in downtown.

Among its founders was later Pritzker Prize winner Mayne, who went on to host the avant-garde Architecture Gallery in his Venice home for several weeks in 1979, featuring visionary work by his yet-to-be-famous colleagues: Eugene Kupper, Roland Coate Jr., Frederick Fisher, Frank Dimster, Frank Gehry, and Peter de Bretteville. The pop-up gallery is the subject of A Confederacy of Heretics, an exhibit with the Getty’s Pacific Standard Time Presents: Modern Architecture in L.A. co-sponsored by SCI-Arc.

We all gotta grow up sometime, but leave it to SCI-Arc to do it with style.