Home Uncategorized So You Want a Dior Handbag? Make It Yourself 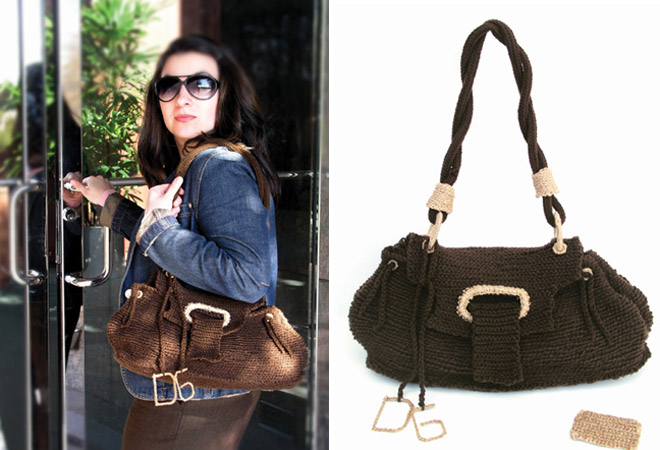 A few years ago, Stephanie Syjuco received what amounted to a cease and desist letter from Louis Vuitton. The designer was concerned about how she was appropriating their trademark clover—alongside logos from Chanel, Gucci, Yves Saint Laurent, Coach, and Burberry—in a global craft insurrection she’s calling The Counterfeit Crochet Project (Critique of a Political Economy).

In 2006, fascinated with issues of piracy and reproduction, the San Francisco-based artist issued an international crafting call to arms: Dig up a picture of your favorite couture handbag; approximate your best version, sans pattern, with wool and a crochet hook; then post your version online, disguising your identity (and theoretically guilty conscience).

The initiative caught fire. The best efforts of Syjuco’s collaborators—uncannily precise knock-offs that only reveal their soft, knobby nature up close—are currently on display in the Craft Art and Folk Museum’s Social Fabric exhibit running through May 5th. On Sunday, Syjuco will hold beginner and advanced workshops at CAFAM, teaching participants basic stitches and techniques for starting their own bags.

Louis Vuitton’s scolding letters never escalated into a lawsuit, but Syjuco said via email she still feels like she has a strong case. For one thing, nothing gets sold. Each product is the sole invention of its creator and not reproducible in any way. “There is also the question of artistic appropriation (à la Warhol’s Campbell Soup Cans) that puts it squarely in line with historical art issues,” she says.

For Syjuco, the project isn’t about thumbing her nose at the designer industry or smirking at an advertising machine that schools us to desire arbitrary objects we can’t afford. Since most bags are manufactured overseas with cheap labor for a fraction of their final price, luxury goods raise fundamental questions about equity.

On her website, Syjucco writes, “I view the impetus to hand-make something as a personal and perhaps even political act, a way to give yourself agency to create and produce in an age of standardization and retail.”

There’s something especially sweet about subverting a one-percenter system of supply and demand with a fundamentally unsexy, supposedly unskilled activity like crocheting, which Syjuco jokingly calls “the lowly stepchild” of crafting.

Will it catch on? We’re hoping to see one of these babies on Jennifer Lawrence’s arm at the next Academy Awards.