Home Uncategorized “So You Think You Can Dance,” Season 11, Episode 9 Recap: Stellar... 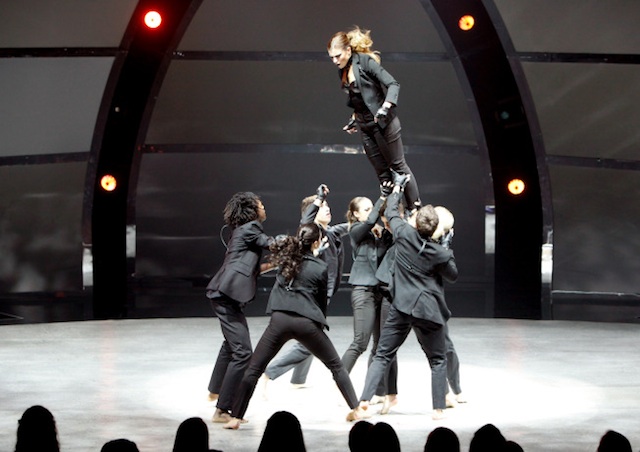 So, City Kids, as we approach National Dance Day on Saturday, another terrific night of So You Think You Can Dance has ended and two more dancers have been sent home. While this wasn’t the most surprising elimination, it’s still sad, especially when one of the eliminated dancers performs her best routine to date. The Top 14 is also a little less colorful now.

Misty Copeland is a terrific judge, but she lacks the variety that a parade of guest judges brings, especially when the judges know what they’re talking about (which fortunately they usually do on this show). That said, Misty returns to judge again tonight, along with regulars Mary Murphy and Nigel Lythgoe.

After a fun water-themed group routine by Mandy Moore, Cat Deeley tells us that Bridget, Marcquet, Brooklyn, Serge, Tanisha, and Zack are the dancers in trouble. It’s surprising to see Tanisha in the bottom, but it’s also clear she isn’t really in danger. The same goes for Zack. Serge looks to be in some trouble, but ultimately it’s Marcquet who’s sent home, along with the partner he auditioned with, Brooklyn.

But before all of that drama there’s a fine night of dancing, starting with Ricky and Valerie doing a high-energy Bollywood routine. Valerie needn’t be concerned with whether or not she can be sexy, and Ricky, as we’ve said, is on another level. We agree with Misty that the hand movements could be just a bit sharper.

Bridget and Emilio dance the first of two contemporary routines, choreographed by house favorite Travis Wall. Bridget, looking like a True Blood vampire with Hep-V, all pale and veiny, represents guilt (or something) that Emilio is trying to break away from. While it’s a familiar theme for Travis, it’s still a beautiful routine that makes great use of a brass bed.

There are two hip-hop routines tonight. Dave Scott provides a Sin City-inspired number (right down to the sexism) for Tanisha and love-struck Rudy—how adorable is he when Cat asks if there was any kissing on his dinner date with Jacque?—while newcomer Will “WilldaBeast” Adams choreographs a piece for a bulletproof-vest-clad Casey and Brooklyn. Rudy and Tanisha both blow the judges away, but Tanisha in that ridiculous black spandex outfit and those red boots steals the show. Casey and Brooklyn also impress the judges, despite needing to be a bit more hard-hitting, because they’re both so far from their comfort zones. Brooklyn actually outshines Casey for a change, giving her best performance thus far.

Marcquet and Jessica dance the first of two very different ballroom routines, a smooth Dmitry Chaplin fox trot to Nina Simone’s “I Put A Spell On You.” (Considering how much SYTYCD has been using Simone’s music this season, including at Saturday night’s Dizzy Feet Gala, we’d think the late singer is making a comeback, which we wholeheartedly support.) Much of the dance is enjoyable though the sexy, bluesy music feels incongruous with the upright poses, leaving us wanting more blues movements. Despite Marcquet’s ballroom background, Latin Ballroom is very different from the Smooth or Standard Ballroom fox trot, and Mary is not pleased with his frame.

Teddy and Emily don’t have to worry about that with their salsa number, choreographed by SYTYCD newcomers Jonathan Platero and Oksana Dmytrenko. Despite recovering from a slip early on in the routine, Emily looks rougher as the piece goes on. She also needs to smooth out her footwork; she’s a bit too bouncy, making her steps look more like sailor shuffles than salsa basics. Teddy, however, remains sexy and strong.

Cat points out that Sonya Tayeh’s jazz piece for Jacque and Zack reminds her of “The Garden,” the first routine Sonya choreographed for the show. That’s partially because of Sonya’s distinctive style, which can feel a bit repetitive (there’s that bent-leg grab in second position again), but also because she’s never topped that first routine. (Similarly, The Little Mermaid is our favorite of the new-school Disney musicals because it was the first with that formula.) The pair dance it well (Zack’s slow controlled handstand is a standout), but like Rudy and Tanisha’s hip-hop, this is another number where the men are fully clothed and the women are essentially strutting around in their underwear. It’s good that Misty finally points out that the guys are on another level this season, but that’s not reason enough for the double standard.

As enjoyable as the duets are, the two final group numbers blow the rest of the evening away. Sonya’s choreography to Bjork’s “So Broken” is breathtaking and touching (though the dancers again look a little like Hep-V vampires). Sonya does so much more with multiple bodies, and even though some of her trademark moves are present (like the leg grab and the angular lifts), there’s more to look at including spectacular group lifts and funky yet fluid movements. It’s too bad that Travis Wall’s group routine knocks it out of the park, with its similar group lifts (did they work on that together?) and exciting, hard-hitting running around. Poor Carly hits a snag, literally, as her foot gets caught in Teddy’s bizarro back suspender as she comes down from that breathtaking lift, but she recovers quickly. It’s great seeing Travis choreograph something more upbeat and sexy, since contemporary seems to mean angsty, soul-searching numbers. It’s also unfair to compare these two choreographies, since they have such distinctive moods. Both are equally fantastic.

What did you think, City Kids? Did the last two group numbers make you forget everything that came before? Are you sad to see Brooklyn and Marcquet leave, or is it their time? Are you ready for a double elimination next week? And most importantly, will you be participating in Saturday’s National Dance Day, even if you don’t leave the house? Tell us how you’ll celebrate in the comments.