Home Uncategorized “So You Think You Can Dance,” Season 11, Episode 8 Recap: The... 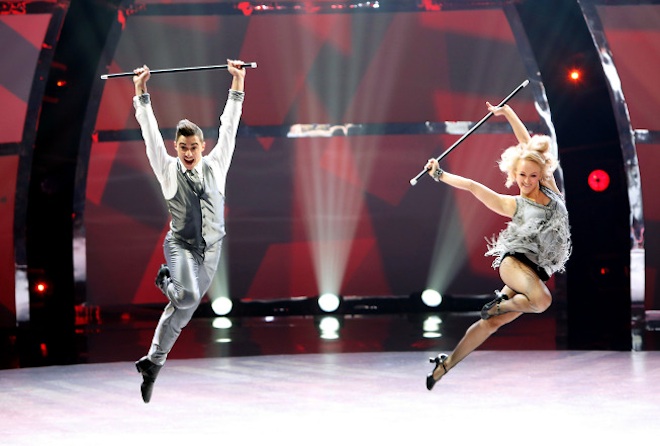 Well, City Kids, “So You Think You Can Dance” delivers another disappointing episode as one of our favorites goes home. All the eliminations are sad, especially when the dancers are this good, but this one really stings. The eliminations also begin to seem obvious, because the judges offer harsher critiques the the homeward bound contestants. But the seven-time Emmy nominated show also delivers great dancing, fitting considering four of those nominations are for choreography (congratulations to NappyTabs, Christopher Scott, Mandy Moore, and Travis Wall).

Jacque and Zack kick off the show with a beautiful lyrical hip-hop number that reminds Cat of NappyTabs’s Season 4 Bleeding Love routine. The dancers start on the floor doing very specific, finger and hand movements, almost like sign language. The piece builds as they stand and move across the floor. It’s lovely and emotional with lots of help from Sam Smith’s tearjerker, “Stay With Me.”

The contemporary choreographers grasp for concepts this week, mostly relying on the songs’ names. Dee Caspary’s lovely routine with Jourdan and Marcquet is about “Disappear”ing, while Tyce Diorio’s contemporary routine with Emily and Teddy to the song “Ne Me Quitte Pas,” which means “never leave me,” depicts a relationship where neither partner wants the other to leave. These fairly basic concepts are sometimes abandoned partway through the routines, but they give the audience something to latch on to while watching the dancing. Both routines are danced beautifully. The men continue to impress, especially Teddy who mesmerized Mary.

Tyce’s other routine tonight is a jazz piece with Jessica and Stanley. The two go on a magic carpet ride, floating and waving across the large rug on the stage, which is much tougher than it looks. Dancing on carpet poses a challenge because you’re unable to slide and it’s easy to get caught in it. Stanley still blew our socks off, even if the judges don’t like him as much. He has boundless energy though it makes the girls seem less peppy. The judges are harsh on both dancers and warn Jessica that she’s not keeping up with the level she set in the early weeks of the show.

Both Bridget and Emilio depart from their respective styles with Anya Garnis and Pasha Kovalev’s jive (remember them from season 3?) routine. Dancing to Pharrell Williams’ “Happy” (we were hoping they’d use Weird Al’s new “Tacky”), the pair impress the judges, with Bridget capturing the technique perfectly and Emilio making up for it with his performance. Mary also reminds us that Anya was the first passenger on the Hot Tamale Train after her season 3 jive with Danny.

Casey continues to show how much stronger the men are this season than the women, as he and Brooklyn perform a Bonnie Story-choreographed jazz prom dance. Casey is dazzling with an enormous smile and great technique, including a couple impressive spin sets. Brooklyn does well, but Nigel warns her that she’s going to need to mature quickly. In past seasons, we used to resign ourselves to watching the men because the women pulled focus, but it’s the opposite this season.

Season 3’s Lacey Schwimmer returns, on loan from “Dancing With The Stars,” to teach Valerie and Ricky the second ballroom dance of the night: a Viennese waltz. The pair dance beautifully to Jason Mraz’s “I Won’t Give Up,” and as much praise as the judges give Ricky, who definitely is a cut above the rest, they all agree that tonight belongs to Valerie. Her magical smile shows the joy that she has for the dance.

Carly and Serge play skeletons in a funky Luther Brown hip-hop reminiscent of that old Walt Disney cartoon, “The Skeleton Dance.” Carly, as Luther says, is a beast, but Serge holds his own, and neither dancer is used to this style. Nigel is lukewarm about the routine, feeling it won’t be enough to get viewers to pick up the phone (though his saying that will probably get people voting for them), but the women both enjoy the routine. We enjoyed it too, at least at the beginning, but then it feels like a bit too much of the same. Perhaps that’s what Nigel is talking about.

Tanisha and Rudy close out the evening with a dynamic Broadway routine, choreographed by one of last year’s two Emmy-nominated choreographers who are not from SYTYCD: Warren Carlyle (the other, of course, is Derek Hough; Carlyle also won this year’s Tony for Best Choreography for After Midnight). The couple, bedecked in sparkly silver, leaps and kicks in perfect unison, doing a little soft shoe and showing off the classic Broadway choreography. The judges love it, rightly so, and Cat takes a moment to get Rudy to admit that he has a crush on Jacque. Fortunately for him, Zack informed us at the top of the show that Jacque seems to be obsessed with Rudy. So it looks like there may be a legitimate love connection on the show. Better than the fabricated romances Dancing with the Stars creates, especially between Peta Murgatroyd and her partner, whichever hot young star it happens to be, each season.

After a lovely performance from A Great Big World—the song “Say Something,” which Amy and Robert danced to last season—the judges announce the results, with no beating around the bush. There’s a quick warning to all six dancers and an explanation that they agreed with the tally of votes, then Stanley and Jourdan are let go. It’s a shame Jourdan didn’t have a chance to establish her place since she always seems to be in the shadow of her twin ballerina Jacque (who, incidentally, we knew nothing about until they announced the Top 20). Stanley leaving is a huge disappointment. We’ll miss his massive jumps and beautiful extensions.

What did you think, City Kids? Do you agree with the judges’ decisions? Do you think the men are stronger than the women this year? Who are your favorites? Are you pleased about the show’s seven Emmy nominations, including best host and best reality program?