Home Uncategorized “So You Think You Can Dance,” Season 11, Episode 6 Recap: The... 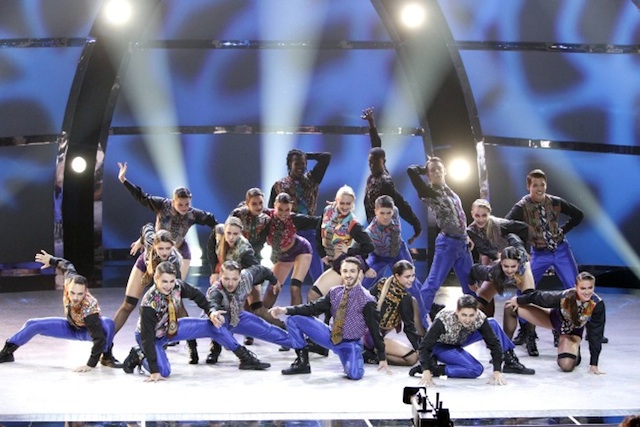 Holy cow, City Kids! What a spectacular first night of dancing for the 200th episode of So You Think You Can Dance! The bar is always set high, but this one is up in the stratosphere.

Host Cat Deeley introduced the brand new Top 20, who danced a hip Sonya Tayeh group routine in fedoras and blue blazers. After meeting our “jidges,” Nigel Lythgoe, Mary Murphy, and guest judge Jason Derulo, the dancers paired up to perform routines in their own style.

After a 16-second introduction to ballroom dancers Brooklyn and Serge, they performed a Dmitry Chaplin-choreographed cha-cha that guest judge Jason Derulo called “steamy.” Mary also loved it but still told it like it is, calling Brooklyn out for her nerves and saying she needs to ground herself. Nigel also wanted her to relate to Serge more. They had only good things to say to Serge, who smoked his way across the floor. He’s definitely more sure-footed than the nervous Brooklyn. She also had a tag in an unfortunate place on her rather (too) revealing costume, and from that point on that was all we could see. With such strong competitors, it’s sad to say they were the weak point.

Emily and Casey portrayed an arguing couple in Travis Wall’s contemporary routine, one of two that played with the concept of pushing and pulling. The two dancers are nicely matched, moving beautifully together, and it’s always a coup to work with audience favorite Wall; his inventive choreography included dancers sliding up and down their partner’s limbs and a gorgeous assisted layout that nicely matched the great music choice. The screaming audience certainly loved it.

It’s always exciting to have tappers on SYTYCD, and these two are fantastic. Harkening back to the brilliant grandfather of tap, Bill “Bojangles” Robinson, Valerie and Zack did a breathtaking stair routine, expertly choreographed by Anthony Morigerato. What a spectacular piece! The pair danced up and down the five-foot tall staircase, executing very difficult and scary steps. Pullbacks? Backward down the stairs? Crazy! And absolutely thrilling.

Stanley and Bridget danced the other push-pull routine, choreographed by Bonnie Story, about a couple breaking up. As beautiful as Bridget is, Stanley stole our attention with spectacular leaps. Simply stunning. And so heartbreaking as he stood there vulnerably while Bridget walked off stage.

The ballerina twins, Jacque and Jourdan, danced a classical and extremely difficult pointe routine from Marat Daukayev. They started out with excellent precision and perfect synchronization, but as the tricky choreography continued, they got out of sync and one of them definitely outshone the other. The problem is, it’s very difficult to know which is which. We suspect Jacque is the stronger of the two, especially given Nigel’s comment urging Jourdan to elevate more.

While Jason Derulo isn’t a terrible judge, fairly entertaining with a little bit of knowledge (and his Whatcha Say song is great, though in large part because of Imogen Heap), his performance of Wiggle seems totally unnecessary—not to mention offensive. “You know what to do with that big fat butt”? And Snoop Dogg snarling, “Damn baby, you got a bright future behind you”!? We assume it’s Derulo’s attempt at a Baby Got Back-type hit, but we could do without it (even if it is a success). It brought nothing to the show, other than allowing Derulo to shill his new album. He was lovely to speak to, though, and we learned he’s a musical theater kid (his favorite show is Ragtime). So that’s cool.

Dancing with the Stars choreographer Louis Van Amstel staged two routines with the two remaining couples in this ballroom-heavy season. This is the first time the judges sent six ballroom dancers through to the Top 20, and Van Amstel told us he’s so proud to be a part of it, especially with such a diverse group of dancers. “I think it’s also very good for the world to watch,” he said. “You see all [these] ethnic groups working together, they’re all different, and yet they’re all ballroom dancers.”

Van Amstel gave both couples showcase numbers. Malene and Macquet danced a sizzling samba in beautiful kelly-green outfits, while Nick and Tanisha charred the stage with their smoky cha-cha. Both couples are amazing, but we think the men are slightly stronger than the women in both cases. Macquet was spectacular. Tanisha held her own more than Malene did, especially with that one-legged death drop—not to mention that kiss (already?) that seemed to catch Nick off-guard, but the men are just so dynamic that they pull focus.

Rounding out the contemporary couples, Rudy and Carly danced to a Stacey Tookey routine that was lovely but somehow not terribly engaging, and power couple Ricky and Jessica performed a celestial Sonya Tayeh piece. Everyone was enraptured by this work. As Nigel pointed out, the normally shrieking audience was deathly silent as Meredith Monk’s ethereal music played and we followed the two dancers across the stage. The way he carried her on his shoulders had a very Khaleesi vibe, and their technique didn’t fail them while performing the difficult choreography. This was a risky piece, but it paid off brilliantly.

Such a diverse evening of dance wouldn’t be complete without a hip-hop (or hip-mop?) piece, choreographed by one of our personal favorites, Chris Scott. We love how Scott uses smooth R&B hits for his works, and the Commodores’ “Night Shift” is a perfect example. Scott told us his father was a janitor at his school when he was young, and he wanted to pay it back. “I’m very grateful for the people who bust their butt to provide for their families,” he said. “This is my way of directly providing a service to them and giving them something they can relate to.”

Scott’s homage to night workers starred Teddy and Emilio as a janitor and a security guard, respectively. This was challenging for the dancers, who had to adjust to using a mop and bucket as props, but they pulled it off beautifully. Emilio threw in some great flips, and Teddy, who’s also a tapper, got to show off a little footwork. We bet he’s totally jelly watching Zack and Valerie’s performance.

So there’s your Top 20 performing their own styles. No grace period for them, as they’re already requiring votes and two of them will be eliminated next week. They’ll also be paired up with new partners, and we’ll see the first of the winning dance crews, so that will be exciting.

What did you think, city kids? Are you blown away by the talent and incredibly high level of competition? Are you sad some of these star couples will be split up already (cough-Ricky and Jessica-cough)? Who are you voting for?