Home Uncategorized “So You Think You Can Dance,” Season 11, Episode 5 Recap: The... 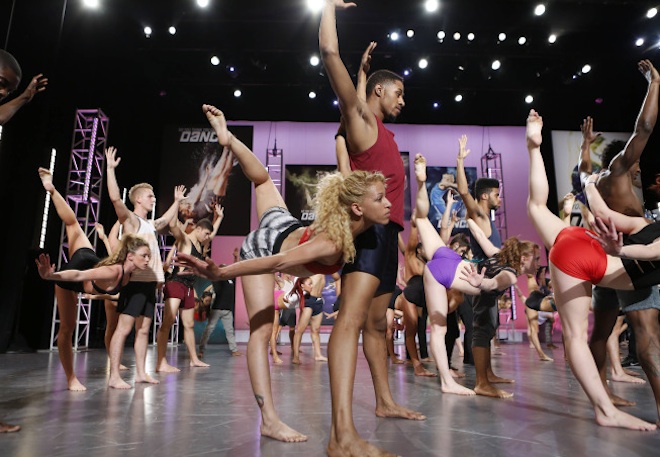 Isn’t it exciting, city kids? So You Think You Can Dance squeezed its four-day, 13-plus hours-a-day callbacks into a two-hour episode, and we now have our Top 20 for Season 11.

The episode mostly pays attention to people we’ve met before, many of whom make it into the Top 20 or are cut at the Green Mile. Both returning and brand new guest judges join Nigel Lythgoe and Mary Murphy for the big decisions. Stephen tWitch Boss and Adam Shankman are back, joined by Irina Dvorovenko of American Ballet Theatre and Olympic gold medalist Tara Lipinski (both of whom we spoke to at the callbacks in April).

Day one of callbacks is almost entirely spent watching solos and cutting the 157 dancers down to 121. At 8 p.m. they start the hip-hop round with choreographer Chris Scott. They have the night to practice, and most dancers are actually able to get a decent night’s sleep (for callback week, anyway). Good. The producers have their all-night drama session (the first of a few) but it’s much less contrived than last year, when Sonya Tayeh gave them the night to practice her jazz routine because they weren’t quite getting it.

After the hip-hop performances on Day 2, many more dancers are cut including Caleb Brauner, who auditioned in two different cities this year, and Trevor Bryce, who was a standout in his audition. We’re surprised he was eliminated so early. He seems to be doing well, but apparently he’s not what they want.

We spoke to Emmy-nominated choreographer Mandy Moore, who will return to the show in a few weeks, and asked about Natalie Reid, who we were reminded of last week. While Moore didn’t have any insights about Natalie’s ousting from the show, she did make an interesting point.

“They always say to us, it’s really about casting a television show,” Mandy explains. “Yes, it’s a dance show, but it’s about casting the right characters and who’s going to fit those themes for that season. It really depends on how many different types of personalities you have and the different people who audition.”

Sonya Tayeh takes over the stage for the jazz round, with assistance from last year’s winner Amy and season 9’s George. This year we’ve seen almost as much of previous seasons’ dancers as we have new dancers, and the callbacks are no exception: We show practically the entire routines that previous contestants are teaching to new ones. Have the producers gotten slack from fans or critics for not showing enough dancing during callback week?

The jazz round is tough for many including female krumper Jana JaJa Vankova, but she dances for her life and proves that she deserves to stay. Many others aren’t so lucky and are sent home, trimming the total number of dancers to 64.

Most of the dancers rise to the ballroom challenge, surviving the round and moving on, despite a couple of horrendous injuries. JaJa again impresses the judges as does her hip-hop crewmate Emilio Dosal, who was selected for Season 10’s Top 20 but had to drop out after an injury. (Boy, they kept him under wraps until the last minute.) Two tappers also sail through the ballroom round: Valerie Rockey from the L.A. audition and newcomer Zach Everhart, Jr., from the Atlanta audition (one of the few in today’s show hadn’t already been introduced). Ballroom dancer Marcquet Hill shines in his “home” round, but he had already amazed the judges in the hip-hop round.

The dreaded contemporary round, with a routine by SYTYCD favorite Travis Wall, proves successful for most, even Johnny Waacks Gibson, who continues to surprise the judges. Bridget Whitman, however, has trouble, throwing herself a little too forcefully into the routine and leaving her partner unable to catch her. She dances for her life, and this woman, whose father died when she was 12 and who seems to weep at every moment, expresses such joy in her dancing. Despite a no from both Nigel and Twitch, she gets three yeses, and is through.

Finally, we’re at group choreography, which is simultaneously our favorite and least favorite round. It creates the most drama as the dancers struggle to work together under the most stress and least amount of sleep. There’s usually at least one train wreck, often from a group who thinks they’ve got it down solid, but there’s also at least one piece that comes together beautifully and is truly moving. Both of these happen tonight, with Nigel asking the train wreck group to decide among themselves who should be eliminated, and with the other group sailing on through—not surprising, considering it has three of the dancers we’ve been following closely. The train wreck passes Nigel’s test by refusing to single out any one person or throw anyone under the bus, so they all get through to the next round. Only six dancers are cut in the group round.

The remaining 44 dancers perform solos again, we’re finally ready for the Top 20. After following so few (relatively speaking) for so long, we don’t expect many surprises, but there are a few dancers unpredictably cut at the last minute. Among them is Jaja, who the judges ask to work on other styles and return next year. She’s still young and has only been dancing for about five years, but we think a female krumper is rare enough to be given a shot. Johnny Waacks and Eric Silky Moore, who’s been through this process at least twice before, both impress the judges, but neither is accepted—in fact, there are only two hip-hop dancers in the Top 20: Emilio Dosal from last year and Teddy Coffey, whom we’ve not met yet.

Many of the Top 20 seem obvious because we’ve been following them so closely: Ricky Ubeda was a shoe-in since his Atlanta audition. So was jazz dancer Jessica Richens, despite them asking her to dance for her life. She nailed it (Michael Bublé’s great rendition of “Feelin’ Good” certainly helped), and eventually went all the way—just as Mary and Christina Applegate suspected at her audition.

Our two tappers, Evan and Valerie, both make it through. We’re excited to see at least one tap routine this season—in addition to Chloe Arnold’s crew, Syncopated Ladies. Joining them are six (count ‘em, six!) ballroom dancers: Marcquet Hill and his auditioning partner Brooklyn Fullmer, Serge Onik and Malena Ostergaard, blonde bombshell Tanisha Belnap from the New Orleans audition, and Nick Garcia, who auditioned in Chicago with his best friend, contemporary dancer Rudy Abreu. Rudy also gets into the Top 20, squeezing out Silky and joining contemporary dancers Emily James (who auditioned in seasons 8 and 9 but went to business school during last season), “the Beast” Stanley Glover, the weepy Bridget Whitman, Casey Askew from Philadelphia, unknown Carly Blaney, and Ricky Ubeda. Two ballet dancers, Jourdan Epstein from Philadelphia and Jacque LeWarne, whom we haven’t met, round out the Top 20.

So there it is, city kids, your Top 20. What do you think? Did it seem obvious based on the footage of the dancers? Were there any big surprises? Are you disappointed about Jaja leaving, or anyone else? Let us know your thoughts.