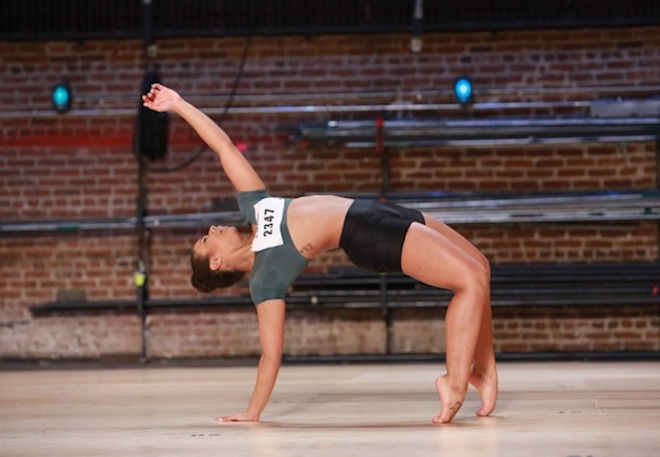 Welcome back, City Kids, for our fifth and final city on the audition tour. Two days in Atlanta brings two guest judges, Lil Buck on day 1 and Jenna Dewan Tatum on Day 2, as well as tons of hip-hop and more dancers from local institution Dragon House.

Last season’s BluPrint and season 9’s Cyrus are both from Dragon House, so we know there’s some talent there. We finally meet one of its founders, Christopher “Mr. Strange” Griffin, who impresses the judges with his funny responses and “In a world” movie trailer voice. His dancing is equally entertaining, showing great musicality in his animation. His thick-rimmed glasses are not the most flattering; once they slipped off his face (and he impressively caught them), we could really see his adorable expressions. Judges Nigel Lythgoe, Mary Murphy, and guest Lil Buck give him a ticket to callbacks.

Not everyone from Dragon House is golden as evidenced by Branden Sideshow Feimster, a “legit” popper and locker showing the “real” style. To be honest, we don’t know enough about the different styles of hip-hop to know what “real” popping looks like but presumably it’s something like this. Sideshow is much less rude and obnoxious than the teasers make him seem, except that he keeps interrupting the judges and doesn’t know how to listen. Pretty much everyone in the audience, including his mom and the other Dragon House guys, know he needs to keep his mouth shut. No matter what you may think of the judges, especially Nigel, it does you no favors to talk back to him.

The big question is, why doesn’t Dragon House create a dance crew and enter that competition?

Of the other hip-hop dancers, we also see Taveaus “Dynamic” Woods, who learned to dance from his best friend Fik-Shun, Brandon “Crazy Legz” Jacobs, who introduces us to ATL Cranking, and the final auditioner of the day, Jerrod Swain, with his pantomime animation. Dynamic gives a great audition mixing popping and animation with great personality and some bone breaking thrown in but not so much that it’s repulsive, like some other contestants we’ve seen. Crazy Legz shows the wacky footwork, skating moves, and high energy of cranking with a great big smile, but it feels repetitive. Jerrod, who sounds like he’s drunk but is just tired, promises a mix of popping, animation, and cranking, but there isn’t much cranking to be seen. His routine, while hysterically entertaining, is heavy on the pantomime and light on dancing. His 4-year-old son is adorable, especially as he falls back asleep again once his dad picks him up. All three go to choreography but none make it past that point.

Eric “Silky” Moore also returns to audition for a third time, this time dancing hip-hop. He had auditioned in seasons 5 and 6, dancing tap—which he should have stuck with. Not that he didn’t impress the judges with his hip-hop; he did, earning a ticket straight to callbacks, but there’s so much hip-hop that it would have been nice to see some variety (and as we’ve said before, we love tap).

There are plenty of stunning contemporary dancers and a couple of wonderful jazz dancers in Hotlanta. Conrad Dechabert returns with something to prove after Nigel said his season 8 audition wasn’t masculine enough. This year he’s back with a ton of tattoos and a much more animalistic style, though there’s still something effeminate about the way he holds his arms. You better like Ricky Ubeda, with his super flexibility, massive jumps, serious spins, and winning personality. The powerful controlled fall he does has so much emotion. He’s truly beautiful. We agree with Nigel: He could go all the way.

While recapping the many montages in last week’s episode, we kept thinking that there are always a lot of montages, but in this episdoe there definitely aren’t as many. There’s one of some strong dancers—including an interesting Japanese fan dancer who’d we’d love to see more of—and a montage (a mantage?) of gorgeous contemporary men, and one of beautiful women, including a ballerina and a woman in a red bikini top who looks like last year’s winner Amy Yakima. We’d like to see more of them as well.

Another returning auditioner, “Princess Warrior” Marissa Milele who made it to the Green Mile last year, goes straight through to callbacks with her impressive tumbling passes and athletic dancing. Elaine Kimble, who was diagnosed with a hole in her heart, the same medical condition that caused her mom to have a debilitating stroke at age 43, dances beautifully if a bit too carefully. She reminds me of Natalie Reid, the roommate of season 4 runner up Katee Shean, who was cruelly and for no apparent reason eliminated mid-Vegas week in season 5 (which we’re still angry and disappointed about). Elaine is not as strong as Natalie, and the judges aren’t kidn to her.

The final two contemporary women both draw inspiration from their brothers. Angelina Granitz learned a lot from her hip-hop dancer older brother (though they don’t bring him on stage) and gives a lovely if dramatic audition with a bit too much hairography. That split looks uncomfortable too, with her foot curled up awkwardly underneath her. Cristina Moya-Palacios, in contrast, began dancing as an escape from the many years living in and out of hospitals because of her younger brother’s serious health issues. In her tiny purple knickers, she demonstrates extreme flexibility and beautiful fouetté turns while walking on her curled-over toes—as many did tonight. Perhaps it’s an Atlanta style. Or is it this year’s move du jour?

We’ll finish this recap with the start of Atlanta’s auditions, the two jazz dancers, both of whom are equally impressive. Mariah Reives’s dancing is surprisingly more sexy and mature than her adorable dance run implies, and Kelly MacCoy puts her performing-family background to good use. We love Kelly’s series of backward falls, but both ladies rely on their right legs for tricks again. They’re not the only ones.

It’s not too surprising that there’s no tap tonight, but a total dearth of ballroom? That’s disappointing. Is it just Atlanta? Perhaps, but it feels like there has been less ballroom overall the last few seasons.

Justin Bieber, with slightly more energy, and Nick DeMoura are back one final time to introduce the last pair of competing crews: Jungle Boogie, an ATL Cranking crew, and Control Freakz, a popping crew. Finally, after weeks of total slaughter in the voting, we have a competition. The voting so far is pretty close, with Jungle Boogie leading by only around 10 percent. Both teams have at least one female member, which is a good start. As expected, Wanted Ashiqz won last week’s vote by a landslide.

So City Kids, who are your favorites this week? Do you also expect Ricky Ubeda to go far? Are you ready for next week’s callback auditions, or did you hope to see more cities?