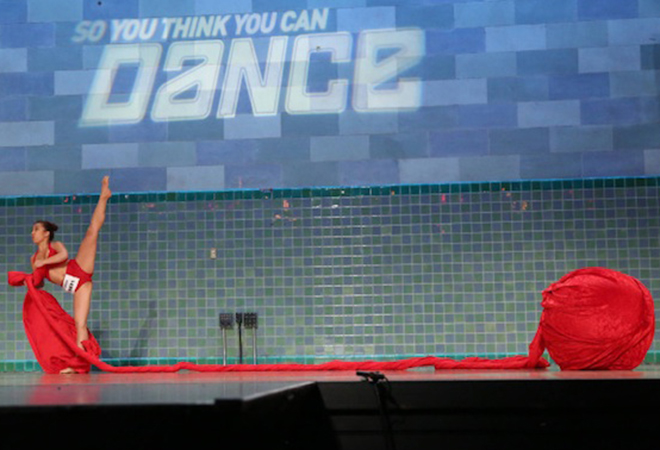 We’re back, City Kids, for Day 2 of Los Angeles’s So You Think You Can Dance auditions, followed, for the first time, by two days in Philadelphia. Christina Applegate joins Nigel Lythgoe and Mary Murphy on the judges’ panel in L.A. while new judges Misty Copeland of American Ballet Theatre and Tony-winner Billy Porter of the musical Kinky Boots join them in Philly. It’s wonderful that they’re bringing in new, knowledgeable, but not as well known judges, and not just big names with star power but with little or no idea what they’re talking about.

The dancers continue to light the stage on fire in both cities. As usual, there are plenty of contemporary dancers showing their talents—so much so that most are strung together in long montages. The bar is so high and apparently there so many that they just don’t have time to show them all. They showed “Merida,” the woman with long, curly red hair, green bikini top, and funky black leggings, in two different montages, so we’ll have to keep an eye out for her in Pasadena.

The producers apparently liked Casey Askew enough, probably because of his many excellent spinning passes, to give him full screen time. While his jagged style is interesting, it’s a bit too abrupt, leaving something slightly unpolished about it. But the judges loved it, and sent him straight to callbacks without commenting.

Many excellent ballroom couples (and not just Latin ballroom) impressed the judges in L.A., including Serge Onik, who made it to the Green Mile last season, and his new partner—and twerk-master (gross)—Alla Kocherga. Armen Way, who was also cut in Vegas last season after accidentally dropping his partner on her head, also returned with a new partner, Malene Ostergaard. Host Cat Deeley weirdly pressures the first couple into a romantic relationship, to which they seem apathetically open. Awkward. The second couple, on the other hand, is so smoky that we felt like we were spying on something we weren’t supposed to be watching. Why doesn’t Cat ask them if they’re dating? Or are we supposed to assume that they are?

In Philadelphia, last season’s Jenna Johnson returned to help out her friend Landon Richardson, who partnered with her for her audition but wasn’t old enough to compete. Misty smartly pointed out how much dance can transform a person, because no one expected this shy, quiet boy to dance like a sexy, confident man (who, sorry to say, needs a better haircut). They picked a great piece of music (from the movie Dance With Me), though it slightly overpowered their dance at the beginning. Nigel also took this opportunity to invite Jenna back as an All-Star this season.

Of course, plenty of street dancers auditioned too. Timothy Joseph sprayed a non-stop barrage of tricks at the L.A. judges, flipping himself off the wall and down the width of the stage, losing all the change in his pockets—and injuring himself in the process. He didn’t give the audience time to parse what he was doing, nor himself a chance to show his personality. Though the judges wanted to see what he could do with choreography, he decided the injury was too much and left.

Hip-hop dancer J4 sure is petite for his “18 and a half” years—but that’s because he’s actually nine. He tells Nigel he wants to audition for the experience (smart kid!) and Nigel lets him, inviting Fik-Shun and Cyrus up to join him. While it seems slightly self-indulgent to show former winners above new auditioners, it’s so much fun watching Fik-Shun and Cyrus do their thing, and J4 kept up with them. He held his own with some serious moves. He’ll be quite the dancer when he’s older. Let’s hope there’s a season 20.

The judges had a good laugh at Johnny “Waacks” Gibson’s name and dance style, but once he performed, they stopped laughing. Nigel complimented him for performing with his face, and not just plastering on a fake smile. He certainly had attitude, in a good way. They sent him through to choreography, where he earned himself a ticket to Pasadena.

Breaker Shafeek Westbrook returned to Philly, in awesome giraffe-patterned pants, after being cut during Vegas callbacks in season 9, and krumper James “Banks” Davis told how he almost lost his leg after a shootout in New York City. Shafeek’s tricks were impressive, but his approach was too gentle and the judges wanted to see more from him; he earned his ticket after the choreography round (and nearly kicked Cat in the head with his backflip). Banks’s slow krump told an amazing story that made us forget he was a krumper. He looked like he was doing well in choreography but it wasn’t enough for the judges.

Perhaps surprisingly, there are several ballet dancers in tonight’s episode, including two on pointe. Jourdan Epstein and Bridget Whitman both shared sad backstories; the former told of her brother’s struggles with addiction, though he’s clean and sober now, while the latter’s father was killed in a car crash when she was only 12. Despite Bridget’s story, her dance is light and flowing, not at all angsty, and Jourdan’s contemporary ballet routine is a pleasure from the first powerful developé. They tend to overuse their right legs, as so many do, but they’re both gorgeous.

Funky Ballerina Amir Sanders didn’t have a tragic backstory, fortunately, and wanted to be like Misty. While her transitions are a little rough, she clearly has excellent technique, as well as personality and appeal. We dig those funky straight-legged hip drops at the end, and the cool choice of music too (Beyoncé’s “Flawless”). Surprisingly (ridiculously), they made her do choreography before giving her a ticket to callbacks.

Among the montages is a group of thrilling African American male contemporary dancers (wonderful to see so many) in Philly, including one in a red tank with massive jumps and a gorgeous double capriole. We also see an odd montage about people’s supporting groups, and would really like to know why that one woman brought the Philadelphia Mummers with her.

With all the montages, it’s disappointing that they don’t show any of the unusual international dance styles they sometimes get at auditions. We see glimpses of unique costumes or props, so we can tell there’s perhaps belly dancing or types of Asian performance dance (like this photo with a giant red ball), but they haven’t shown more than a quick shot. Fox released a photo of an Irish dancer, but sadly she didn’t even appear in a quick montage in tonight’s episode. We’d think the dance styles would be unique enough to warrant a little more than a flash.

Closing out the Philly auditions is “the Beast,” Stanley Glover, whose many layers impressed Mary. Like Landon before him, Stanley used his choreography to transform his sweet, demure self into a growling, animalistic creature, with strong ballet technique.

As usual, Justin Bieber and Nick DeMoura are back with this week’s dance crews, a Bollywood and hip-hop fusion group called Wanted Ashiqz, and a hip-hop acrobatic crew called Mix’d Elements. By the end of the episode, the Bollywood guys are kicking butt with some 85 percent of the vote. Not surprisingly, Academy of Villains is the winning crew from last week.

So what did you think, City Kids? Who were your favorites tonight? Are you looking forward to next week in Hotlanta? Cast your votes in the comments.